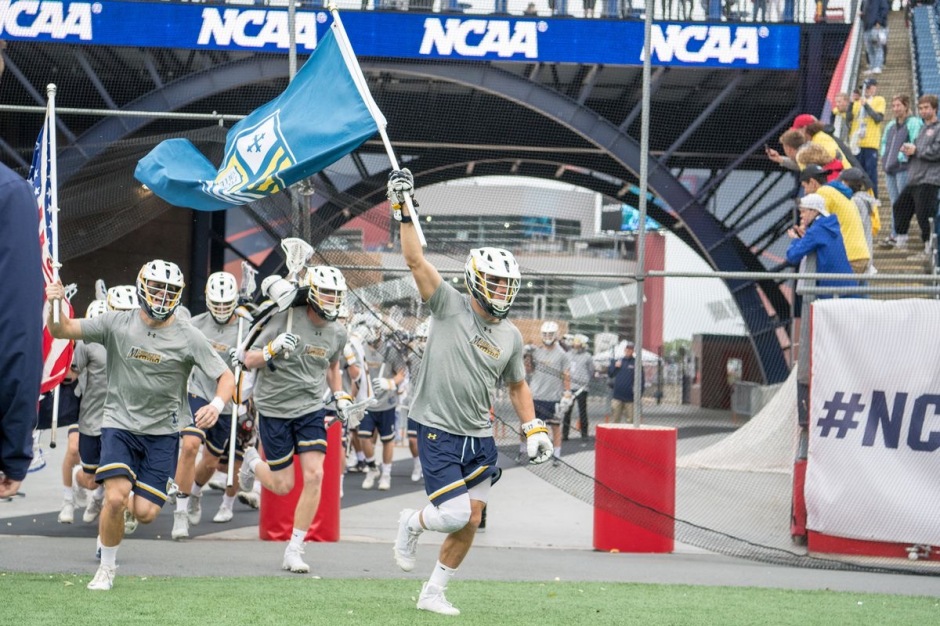 College lacrosse is back, y’all!

The first weekend – which many call week zero – of the 2020 NCAA season gets underway on Saturday when 24 teams will suit up for 12 games to kick off the season.

At 11am ET, Marquette and Cleveland State, and Bucknell and Furman will play in the first two games of the season.

The biggest story coming into this season is Merrimack and LIU (formerly LIU Post) moving up from DII to DI. Merrimack, the two-time defending DII national champions, make their DI debut this weekend.

Merrimack is somewhat following in the footsteps of Bryant who made the same jump in 2009. The Warriors and Bulldogs are back in the same conference now: the NEC. LIU also joins the NEC this season.

The Warriors make the jump with two-time DII Player of the Year Charlie Bertrand leading the way, in addition to a whole host of experienced players on both ends that have won a lot of games in their college careers.

Their first DI contest against Holy Cross will draw plenty of eyeballs as the lacrosse world wants to see how well this Merrimack team looks at the DI level. And while they won’t be able to play in the postseason until 2024 due to the probation or ‘grace period’ that the NCAA puts on athletic departments moving from one division to another, there is a belief that Merrimack can make some noise right away.

I interviewed Merrimack head coach Mike Morgan back in Winter about their transition to DI. You can read that here.

Per usual, coaching turnover is part of the business of college athletics and lacrosse is certainly not immune to that. On Saturday, four new head coaches will make their debuts.

Two of them will face each other as Andy German and the Cleveland State Vikings host Andrew Stimmel and the Marquette Golden Eagles.

In Newark, New Jersey, Rashad Devoe will make his debut as the head coach of the Hampton Pirates as they take on the NJIT Highlanders. Devoe’s first year at the helm of the Pirates is highlighted by a schedule that features eight DI opponents, the most that they have faced in their five-year history.

Andy Whitley will make his debut as the head coach of the Bellarmine Knights as they travel out to Salt Lake City, Utah to take on the second-year Utah Utes. Last year’s contest between these two programs saw Utah win a narrow 10-9 contest.

The Debut of The Goal-Mouth Arc

Last year, the NCAA introduced the shot clock and re-introduced the dive. While both created buzz and sparked a season-long debate, the dive created much more mayhem due to the way the rule was written and the inconsistency among officiating the rule.

This past offseason, the NCAA approved the goal-mouth arc. This new arc will extend six-feet from the center of the goal line to the goal lines extended on both sides of the goal.

Here’s a look at the goal-mouth arc in college lacrosse pic.twitter.com/8L76xLbhvk

Here is the official ruling from the NCAA: “Offensive players are prohibited from jumping or diving then subsequently landing in the newly defined goal mouth. In addition, the penalty for initiating contact with the goalkeeper within the goal mouth will result in no goal and a one-minute penalty. Landing in the goal mouth without contacting the goalkeeper will result in no goal and loss of possession.”

Essentially serving as lacrosse’s version of the semi-circle under the hoop in basketball, we’ll see how effective this new rule is in helping to take out the inconsistency in officiating and “cleaning up” the dive.

When the North Carolina Tar Heels take the field against the Colgate Raiders on Saturday in their season opener at home, all eyes will be on a 5-foot-7, 170-pound junior attackman from Wading River, N.Y.

Former Boston U. phenom Chris Gray put up gaudy numbers for the Terriers over the past two seasons. But the attackman entered the NCAA Transfer Portal over the summer and decided to take his talents to Chapel Hill, N.C., where he is expected to make an immediate impact for the Tar Heels.

Gray was the nations leading scorer amongst DI during the regular-season, tallying 111 points (49g/62a). At North Carolina, Gray joins the likes of sophomore attackman Nicky Solomon and senior midfielder William Perry as the top-three scorers for the Tar Heels, based on their performances last season.

Additionally, North Carolina-Colgate will be the first lacrosse game shown the ACC Network.