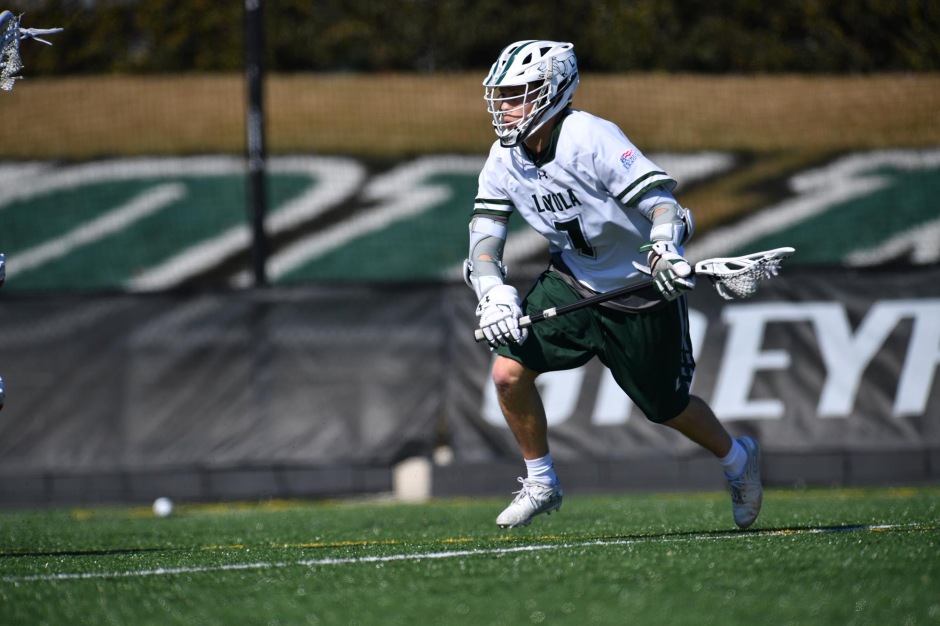 It was a wet one at the Ridley Athletic Complex, but that didn’t slow down the Loyola Greyhounds one bit as they dominated cross-town rival Towson in a 15-6 victory. Loyola now leads 34-29 in the all-time series.

With Towson missing starting defensemen Koby Smith and Gray Bodden due to injuries, the Greyhounds took full advantage. 31 of Loyola’s 51 shots were on goal and many came from inside 5-10 yards as the Greyhounds kept penetrating the middle of the Towson defense and making guys look silly. They also played incredible defense both in the six-on-six and in transition, holding the Tigers to just 0.61 shots per possession, causing 15 turnovers, and allowing 16-22 successful clears.

Aidan Olmstead assisted on the Greyhound

s first two goals from Kevin Lindley and Dan Wigley, and Peter Swindell utilized a short-stick matchup very well, inside rolling right past Brandon Hun to push Loyola out to a 3-0 lead late in the first. And outside rip from Brody McLean finally got Towson on the board with 2:24 in the quarter.

Each team scored two straight in the second, making it a 5-3 Loyola lead heading into the half. In the third, Towson was able to make it a one-goal game with two straight from Luke Fromert and Brody McLean cutting the Greyhounds lead to 6-5.

Coming out of the media timeout following McLean’s goal, Loyola turned on the jets. The Greyhounds scored nine consecutive goals from 5:43 mark in the third to the 2:26 mark in the second, blowing this game out of the water and firmly securing the victory.  Towson broke their nearly 22 and a half minute scoring drought with a James Avanzato goal with just :26 seconds left in the contest.

Aidan Olmstead showed his prowess as a feeder, dishing out four assists and scoring one goal for the Greyhounds. Kevin Lindley had four goals and Joey Kamish had three goals. Bailey Savio went 14-for-22 at the faceoff dot and Sam Shafer made nine saves.

Towson was led by Brody McLean with two goals and one assist, while James Avanzato scored two goals and Austin Stewart had three assists. Shane Brennan made 16 saves in cage.