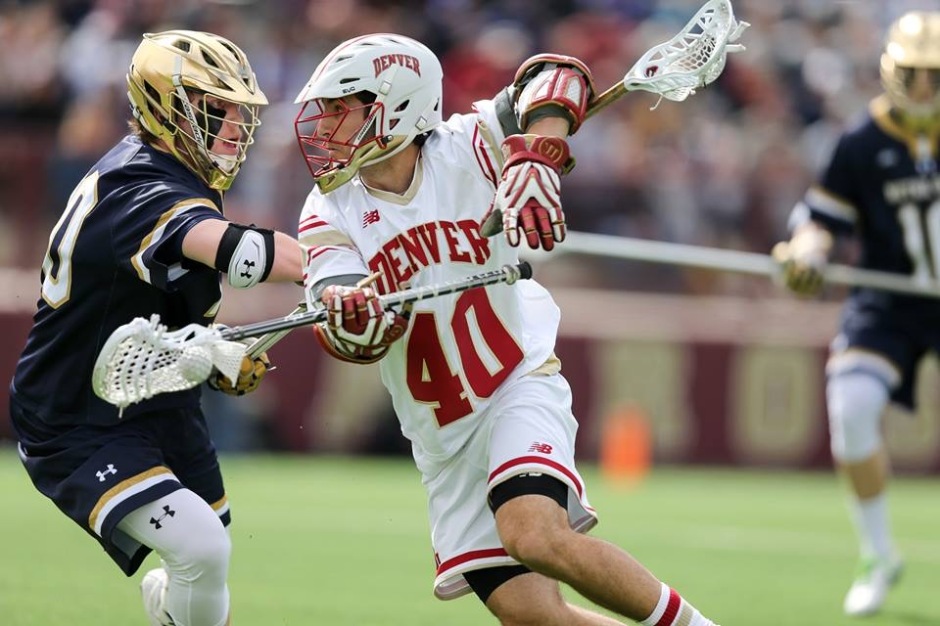 Throughout the history of college lacrosse, there are a ton of what-ifs. And they can literally be found in every decade. Everything from a blown call, a shot that rings off the pipe, and injury, coaching change, and much more can be put under a microscope and examined as a ‘what-if’ scenario.

Here are some of the biggest what-ifs in college lacrosse history.

The Dave Cottle era at Maryland lasted from 2002-2010. The Terrapins went to eight out of nine NCAA tournaments during his tenure, making the final four three times (2003, 2005, 2006). However, the end of Cottle’s tenure is very much highlighted by the fact that they went didn’t make a Championship Weekend appearance in the final four seasons with him at the helm, losing in the first round in 2006 and then making three straight quarterfinal appearances from 2008-2010. But Cottle resigned following the 2010 season, Maryland hied then-Harvard head coach Johns Tillman, and the rest is history.

But what if Maryland had never told him he needed to make the final four in 2010 to earn a contract extension and he stayed on as the head coach of the Terrapins? Would they still have gone to the national title in 2011, made five straight Championship Weekend Appearances from 2014-2018, ended the Maryland national title drought in 2017, and be considered the best program of the 2010s?

On the flip side, that would mean that John Tillman wouldn’t have come to Maryland in 2011. So, would he have stayed at Harvard and built them into an Ivy League power or would he have left for a bigger job down the road, anyway? If he did stay at Harvard, could he have produced similar or success to what he has at Maryland? If so, would Yale been able to flourish the way they have under Andy Shay?

What if NC State and Michigan State Never Dropped Lacrosse?

Both NC State and Michigan State used to have DI Men’s lacrosse programs. The Wolfpack dropped its program following the 1982 season and the Spartans dropped their program in 1995. NC State had some strong seasons, including an NCAA quarterfinal appearance in 1979, and some great players with Stan Cockerton and Tim Nelson donning NC State jerseys once upon a time. Michigan State also saw some success with a few NCAA tournament berths.

But what if neither of those programs had dropped their programs? First off, the ACC would still have an automatic bid to the NCAA tournament and the states of North Carolina and Michigan would have another program. But would could be?

The Big Ten didn’t add lacrosse until 2014. But if Michigan State hadn’t dropped lacrosse would that have happened sooner? Would the Spartans’ presence have made Michigan decide to DI sooner? If so, could having two DI teams in the state have helped lacrosse boom in the state and midwest earlier than it did?

What if Kevin Corrigan Left Notre Dame For Virginia?

Kevin Corrigan is Notre Dame lacrosse. During his 31-year stint in South Bend, Ind., he had led the Fighting Irish to 24 NCAA tournament appearances, which includes five trips to Championship Weekend and two national title appearances. But what if he had left following the 2016 season to replace Dom Starisia as the head coach at Virginia, where his father, Gene Corrigan, once served as the head lacrosse coach at athletic director?

Could Corrigan have brought Virginia lacrosse back to the top of the college lacrosse world? Would Virginia have ended their ACC losing streak and won the national title in 2019? Would have Corrigan’s style have worked at Virginia or would his more conservative style have hindered the Cavaliers given their roster?

On the Notre Dame side, what would they be without Corrigan? Would Gerry Byrne have taken over as the head coach of the Irish? And could he have kept up the high standard that Corrigan has set?

Also, it is interesting to wonder how current Virginia head coach Lars Tiffany would be doing at Brown? Could he have led them back to Championship Weekend in 2017 with Dylan Molloy as a senior and would they have stayed at the top of the Ivy League instead of falling down a bit?

What if Paul Rabil Went to North Carolina?

Paul Rabil is one of the biggest names in the sport, and he has been since his days at Johns Hopkins, where he was part of two national championship teams (2005,2007). And it is well documented that he grew up in a North Carolina household. So how would things be different he had turned down Hopkins and headed to Chapel Hill instead?

It is hard to believe that Rabil would have completely turned around some of those down years that the Tar Heels had during those years, but it is safe to assume that he could have led them to some better seasons. Rabil could have possibly led them to Championship Weekend in 2007 when they lost to Duke in the quarterfinals. Also, could the Tar Heels’ national title drought have ended sooner than 2016 if they had gotten Rabil?

Also, if Rabil didn’t play under Dave Pietramala at Johns Hopkins would some of his modern ventures not exist? Would he still become the first millionaire lacrosse player? Probably. But, would Rabil have had the drive he does to expand the sport? If not, would we even have two pro field leagues right now?

On the flip side, would Hopkins would have had as much success as they did during those years? Would not having Rabil have severely hindered their chances to compete for and win a national title?

What if Bill Tierney Hadn’t Taken the Princeton Job?

Bill Tierney is one of the greatest, if not the greatest, lacrosse coach of all-time. And while he had past head coaching stints at the high school level and at RIT, he made his mark when moved from being an assistant at Johns Hopkins to being the head coach at Princeton, where he won six national titles and revolutionized the sport with his “Princeton Defense”.

But what if Tierney never took that job ahead of the 1988 season and elected to stay at Johns Hopkins under Don Zimmerman?

Would Tierney have eventually moved on to another place as a head coach and made his mark there? Would he have stayed loyal to Hopkins and Zimmerman, and eventually taken over as the Blue Jays’ head coach? Would Tierney have been able to have as much success at another school as he did at Princeton? Many would like to think so because it is Bill Tierney, but who really knows?

One thing is for sure if Tierney had not taken the Princeton job and eventually became the head coach at Johns Hopkins or elsewhere, the sport would look vastly different. There might not have been any historic Princeton-Syracuse battles in the 90s and early 2000s. Also, Tierney not going to Princeton could  possibly have led to him not going to Denver, either.

What if Connor Cannizzaro Stayed at Maryland?

In 2014, Connor Cannizzaro was named the ACC Freshman of The Year after a big season at Maryland. But the rest of his college lacrosse career was spent out west at Denver, where he played under Bill Tierney and helped the Pioneers become the first team west of the Eastern Time Zone to win a national title. But what if he didn’t leave Maryland?

If Maryland has Cannizzaro all four years of his college career, could the Terrapins have won the national titles in 2015, 2016, and 2017 instead of just 2017 and being the runner-up in 2015 and 2016? Would he have been the feature attackman on those teams instead of Matt Rambo? Would Dylan Maltz have transferred elsewhere after leaving Syracuse? What would a Maryland attack line with Cannizzaro, Rambo, and Colin Heacock have achieved, and would they be considered the best attack in the history of the sport?

Denver still would have been a great team without Cannizzaro, but would they have been able to win a national championship in 2015 if he didn’t leave Maryland? Honestly, we might still be waiting for the trophy to head west if Cannizzaro had not transferred to Denver following his freshman season at Maryland.

What if Rutgers Didn’t Lose to Delaware in 2017?

But what if Rutgers hadn’t lost that game? Would they be able to carry their momentum into the next week and avoid a 12-6 loss against Johns Hopkins the next week? If so, could the Scarlet Knights have kept riding their hot streak for the rest of the year and make the Big Ten Tournament and the NCAA tournament?

Also, if they had kept up their winning ways, could we have seen a rematch of the triple-overtime regular-season thriller between Rutgers and Maryland in both the Big Ten Tournament and the NCAA Tournament?

What if Grant Ament Never Got Hurt?

Penn State Grant Ament missed the 2018 season due to a foot injury. He also missed a game against Cleveland State in 2019 and had surgery in November of 2019 after re-injuring his foot. And while Ament did lead Penn State to Championship Weekend in 2019, what could have been if Ament was healthy in 2018?

Ament, who holds the NCAA record for single-season assists (96), could likely have set that record a season earlier and could have surpassed Pat Spencer’s career assists record of 231. And also, where would Ament have gone in the 2019 PLL Draft? Could it have been Ament going No. 1 instead of Spencer?

Penn State’s timeline as a program would have been pushed up, as well. Could they have arrived in 2018 instead of 2019? Would they have won a national title in 2019 and become the 12th program to win it all in the NCAA era?

What if TD Ierlan Stayed at Albany?

One of the biggest offseason storylines of the past decade has been TD Ierlan transferring from Albany to Yale after losing to the Elis in the 2018 NCAA semifinals. Ierlan then helped Yale capture the program’s first NCAA title in 2019. But what of Ierlan would have stayed at Albany?

First off, Albany’s 2019 season probably wouldn’t have been so bad. Ierlan is pretty much automatic at the dot. But could his dominance at the faceoff dot have helped lead Albany back to a second Championship Weekend appearance? It is a definite maybe, but when you consider how much of an impact player Ierlan is, it is plausible to think they could have done it.

Also, would Yale have made the run they did in 2019 without Ierlan’s impact at the faceoff dot? Possibly, but it seems unlikely. His performance won multiple games for the Bulldogs in 2019, including their two high-profile contest against Penn State. If Yale did not have one of the best faceoff men at the dot in 2019 they probably wouldn’t have made it back to the NCAA Championship, and it is highly likely that they wouldn’t have only lost to just three teams (Villanova, Penn, Virginia).

What if Virginia’s Non-Goal Was Called Correctly?

The Virginia Cavaliers beat the Maryland Terrapins in overtime of the NCAA Quarterfinals in 2019 to punch their ticket to Championship Weekend for the first time since 2011 and deny Maryland their sixth straight trip. But the Cavaliers’ victory was not without controversy.

With Maryland up 12-11 with 1:14 left in the fourth, Virginia’s Michael Kraus stung one past Maryland goalie Danny Dolan. However, the shot did not appear to cross the goal line and hit the pipe. But it was called a goal. The Cavaliers won off a Matt Moore goal 45 seconds into overtime.