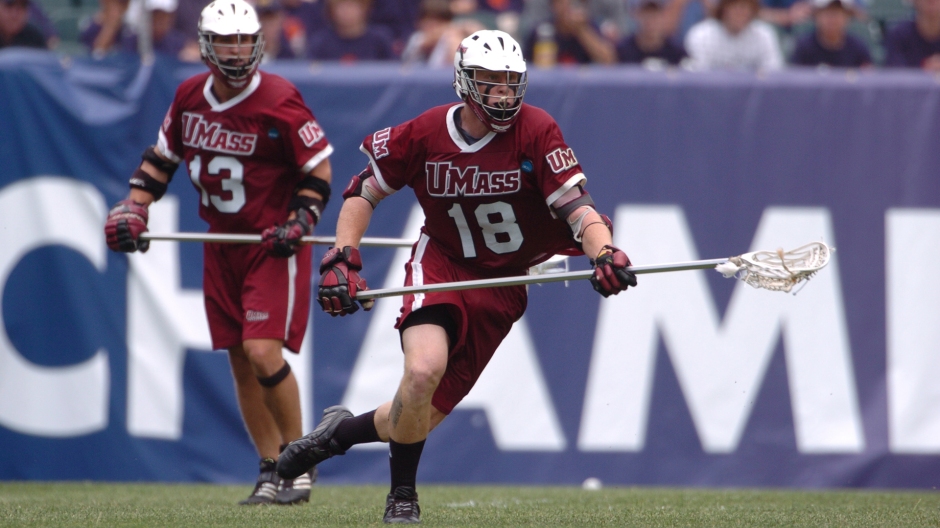 Hofstra and UMass went head-to-head at Stony Brook in the 2006 NCAA Quarterfinals. While this contest pegged two hunters looking for their first-ever Championship Weekend berth against each other, it was also a rematch of a regular-season meeting in which UMass handed Hofstra their first loss of the season.

The full game isn’t on Youtube, but the majority of the fourth quarter and the entire overtime period are. Watch it here.

The first three-quarters of this contest were all Hofstra. The Pride’s offense, led by Chris and Mike Unterstein, were firing on all cylinders and their defense wasn’t letting the Minutemen get many opportunities at all.

While Hofstra took a 9-5 leading, a John Keysor goal early in the fourth put the Pride up 10-5 and it looked like UMass would need a miracle to come back from that five-goal deficit. That miracle came for the Minutemen, as they stepped on the gas in the final eight minutes of the fourth.

UMass ended the game on a six-goal run. A Rory Pedrick goal with 49-seconds forced overtime and Jim Connolly scored the game-winner off of a feed from Brett Garber to complete the spectacular comeback and send the Minutemen to the NCAA semifinals. Hofstra had multiple opportunities to subdue the UMass run and potentially run out the clock late, but mistakes on the offensive end proved deadly for the Pride.

The Game Within The Game

Jake Deane’s success at the faceoff dot is what helped will this UMass squad to victory. Deane had been having a good day at the dot through the first there quarters, but he really took off in the fourth quarter, going 7-for-7 in the final stanza of regulation. He also won the lone faceoff in overtime, ending the game with 20 wins out of 25 attempts.

The battle at the faceoff dot was absolutely crucial to UMass’ comeback in the fourth quarter. As usual, the team that wins the most faceoffs gets more possessions and possession time and UMass did not waste either of those, stepping on the gas and never letting up.

UMass: Jim Connolly not only scored the game-winner, but he carried the Minutemen offense the entire game. The attackman was the game’s leading scorer, tallying five goals in the victory.

Hofstra: The Pride’s offense was the Unterstein show. And while both Chris and Mike were crucial in this contest, it was Chris that did the majority of the heavy lifting for the Pride. The attackman ended the game with four goals, there’s of which came in the first half when Hofstra.

Play of The Game

Jim Connolly receives the feed from Brett Garber and stings the back of the net to complete the comeback and secure the overtime victory for UMass.

#PlayOfTheDay 2006 NCAA Quarterfinals:
UMass’ Jim Connolly finishes off the feed from Brett Garber to complete the comeback, take down Hofstra, and send the Minutemen to the Final Four. @UMassMLacrosse pic.twitter.com/KwlxHqbGcq