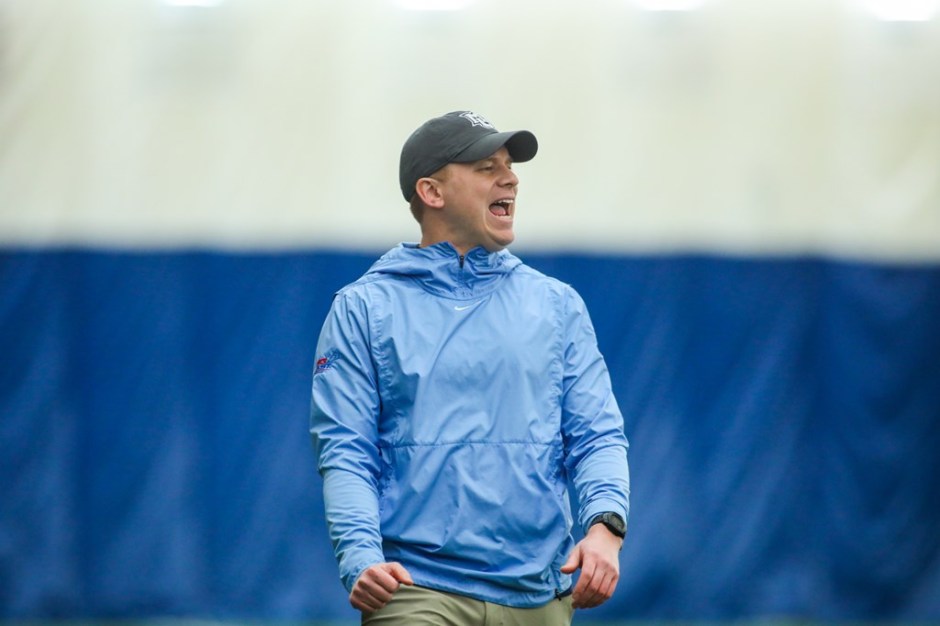 In the summer of 2019, Andrew Stimmel returned to Marquette, where he served as the Golden Eagles’ defensive coordinator in 2017, following a three-year stint as the offensive coordinator at Yale to take over the reigns and take on the challenge of being a first-time head coach and upholding the standard that has been set for Marquette lacrosse over their first seven seasons as a program.

And while many expected the transition into the Stimmel era to go rather smoothly, the 2020 season was, without a doubt, not a usual year. The first year of the Stimmel era, or year zero as many say, saw the Golden Eagles go 3-4 before the season was cancelled due to the Coronavirus outbreak. And none of their losses couldn’t have easily gone the other way, as all four of their losses came by an average of 1.5 goals.

Like many other new head coaches around the college lacrosse landscape, the 2021 season could feel more like a second year zero as opposed to a normal second year on the job. And not only due to the fact that the 2020 season was cut short, but also due to the amount of impact players that the Golden Eagles will bring back, which includes fifth-year guys that have opted to take an extra year.

The Golden Eagles will return six seniors from a year ago, including attackman three full-time starters in defensemen P.J. Cox (5GB/2CT), Peter Henkhaus (8GB) , and midfielder Ryan Fazio (7G/7A). Midfielder Connor McClelland (7G/2A), who played and started in three contests last season, will also be returning and looking to finish out his strong college career. Additionally, they add some talent and depth at the midfield spot with Bellarmine grad transfer Morgan Macko, who was one of the biggest impact players on the offensive end for the Knights throughout his career in Louisville.

While those fifth-year guys will surely make a significant impact this coming season, Marquette will still be relying heavily on young talent in many spots on the field. And nowhere is that more apparent than on the offensive end.

First-year offensive coordinator Peet Poillon led a unit last season that was the 43rd scoring offense in the nation, averaging 11.71 points per game, an boasted the 23rd best shooting percentage in the nation (23%). While it is difficult to compare and full season to a shortened season, the Golden Eagles were on track to surpass their numbers in both of those categories from the 2019 season, where they ranked 46th in scoring offense (10.79) and 42nd in shooting percentage (28%).

And while moving the needle forward in both of those categories is a great sign, what might be an even better sign for Marquette is the fact that they achieved that success with three freshman and one sophomore amongst their top six offensive threats. Midfielder Chris Kirschner (16G/4A) and attackmen Devon Cowan (9G/8A) and Jake Stegman (5G/10A) were the Golden Eagles’ top three scorers this past season. Attackman Holden Patterson (9G/2A, a sophomore last season, was tied for fifth on the squad in scoring.

With as many experienced young guys and veteran leaders as they have coming back in 2021, this Marquette offense is perfectly positioned to take another step forward and maybe even surprising some people.

The story is very similar on the defensive end of the field, where the Golden Eagles return all three of their starting close defensemen from last season. In addition to Cox, who was a full-time starter, coming back for a fifth-year, Marquette returns their other two starting poles in Mason Woodward (28GB/13CT) and Zach Granger (16GB/8CT). The pair were the Golden Eagles’ top two poles last season as a freshman and sophomore.

At the faceoff dot, the Golden Eagles will return their top guy from last season in Thomas Washington. He went 61-for-136 (45%) at the dot. They will also have redshirt freshman Luke Williams and freshman Luke Rios as options at the dot. Neither have seen any college action.