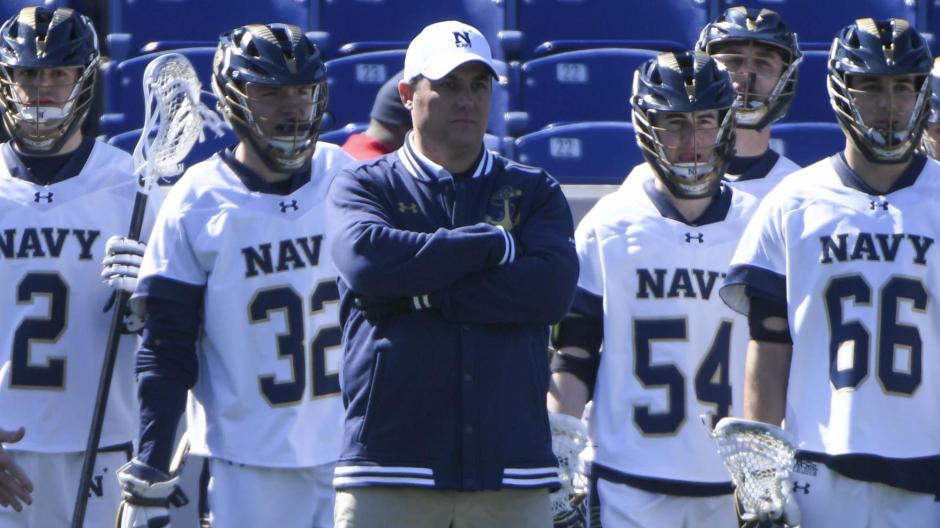 Y’all know the story by now.

Navy has one of the most storied lacrosse programs in the history of the game. The Midshipmen have 17 pre-NCAA national titles to their name and have been to the NCAA national championship twice (1975,2004). They have also appeared in 27 of the 48 NCAA tournaments and have five conference titles on their resume.

And while the Navy has been at or near the top of the college lacrosse world for most of its history, things haven’t been so good as of recent. While they were just one goal away from a Championship Weekend appearance in 2016, they only churned out an above .500 season and made the Patriot League Tournament in one of the three seasons following that 2016 season. That inconsistency is part of what led to the end of the Rick Sowell era and gave way to the Joe Amplo era, which got underway last season.

Prior to his arrival in Annapolis, Amplo built himself a reputation of being a builder after he took Marquette from being the Midwest’s newcomer to one of the top programs in the region and the Big East conference. And at Navy we get to see how much of a rebuilder he can be. And so far, he has shown that he can in fact rebuild one of the most historic college lacrosse programs.

During the 2020 season, Amplo lead the Midshipmen to a 3-2 record (1-1 in conference), which included wins over Manhattan, Furman, and Colgate. Their losses came against Richmond and Lehigh, who were ranked No. 18 and No. 18 when they took the field against the Midshipmen.

In addition to the on-field success in the win column, Amplo and Navy also saw a ton of recruiting success this past year. The Midshipmen finished the 2020 cycle with the No. 1 ranked recruiting class in the nation, according to Inside Lacrosse. The class was highlighted by McDonogh, Md., defenseman Jackson Bonitz and Shoreham Wading River, N.Y., attackman Xavier Arline, who also plays football for Navy and could play both for the Midshipmen. Both Bonitz and Arline were ranked as top-20 prospects by Inside Lacrosse.

Coming into his second year at the helm of the Midshipmen, Amplo has created a significant amount of momentum both on the field and on the recruiting trail, currently boasting a top-15 recruiting class in 2021 and 2022, according to Inside Lacrosse. While this momentum and hype building around the potential of Navy is great to see again, time will only tell how well it carries over onto the field in 2021 and how far they can go.

One of the biggest areas of improvement for Navy during the shortened 2020 season was their defense. In 2019 they ranked 50th in scoring defense, allowing and average of 12.08 goals per game. At the time the 2020 season was cancelled the Midshipmen held the 11th-best scoring defense, allowing 9.40 goals per game. Now while their losses did come against the only top-30 offenses they faced, the Midshipmen did hold two of their opponents (Manhattan and Furman) to four and three goals and they only had two full-time starters from 2019 returning on the back end.

Seeing that growth on the back end under Josh Orsen in just his first year as defensive coordinator is a good sign for this program, no matter how small of a sample size it was. And they should continue to take another step forward, especially with how veteran laden they look to be on that end this coming spring.

Seniors Nick Frachuk (13GB/7CT) and Andrew McKenna (8GB/6CT) are their only two returning close defensemen. McKenna has been a starter since he first stepped foot in Annapolis and is one of their most battled tested poles, while Frachuk has been used at both LSM and close throughout his career and was a full-time starter at close for the first time in his career this past spring. In addition to those two, the Midshipmen return two capable LSM’s in senior Jeff Durden (6GB/3CT), who was their number one at the position last season, and junior Jimmy Rubino (9GB/2CT) who are expected to put up similar performances and make an impact on the back end again in 2021. Navy also has a strong and diverse barn of defensive midfielders, like Tim Griffin and John Salcedo, who should also step up more this coming season.

Just like they will have to find someone who can step up and fill the hole they have at that third defenseman spot, Navy also has to fill a huge hole in cage left by the graduation of four-year starter Ryan Kern. While it won’t be easy to replace a goalie like Kern, they do have multiple guys that could earn that starting spot.

Senior Spencer Rees looks like the most capable goalie to take over as the starter for the Midshipmen this coming spring. The Boy’s Latin, Md., product made four appearances as a sophomore in 2019 and saw action in one game last season. In that one appearance, which was against Furman, he saw 15 minutes of action and made two saves. Pat Ryan, Shane Corcoran, and Ryan Verducci all each saw limited action against Furman. They also bring in two freshmen goalies in Wilton, Conn., Andrew Calabrese and the Hun School, N.J., Gabe Craven.

Offensively, the first year under new offensive coordinator Brad Ross did yield improvement. Ranked as the 50th scoring offense in the nation in 2019, the Midshipmen ended the shortened 2020 season tied with UMBC for 40th in that category, averaging 11.80 goals per game. Additionally, while the Navy was still very attack heavy as it has been for a few years we did see more diverse play on that end as the midfield started to revive after a few down seasons.

This Navy offense is expected to stay on a similar path with all of their top five scorers from last season returning. Senior attackman Christian Daniel (8G/9A) is expected to be leading the way on offense once again. The four-year starter has been one of the faces of Navy lacrosse since he first arrived in Annapolis and will be looking to close the final chapter of his college career with a bang. In addition to Daniel, senior attackman Tyler Perreten (11G/4A) and junior attackman Nick Cole (8G/4A) also look to continue their impressive play.

It was a pair of freshmen who made all the headways at the midfield spot for the Midshipmen last season. Patrick Skalniak led the way for the unit with 10 points (5G/5A) and Henry Rentz also put up eight points (3G/5A). The duo showed their stuff in the five games they got in last season and will be expected to take it to another level as sophomores in 2021. Additionally, Augie Fratt (5G/2A) could see an increased role and we’ll have to wait and see if senior Michael Foster, who was a full-time starter in 2019, looks as he comes off an injury that sidelined him for the entire 2020 season.

Navy might not be ready to take the Patriot League by storm as they have done in the past, but they are certainly not too far away from being able to do so. And how much success they can have in 2021 will be a big indicator of how close they actually are to getting back to that standard that many have for this program.