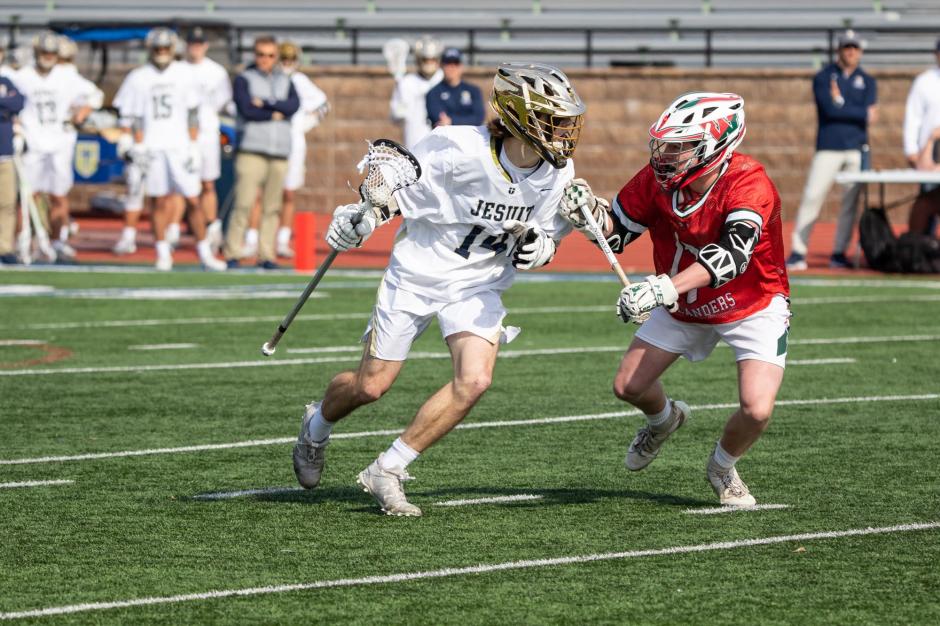 The Texas High School Lacrosse League (THSLL) is currently set to start play in late January/early February, which is on par with how things usually go in the Lone Star State.

With the high school season just right around the corner, here are a few superlatives from around Texas heading into the 2021 spring season:

Team Most Likely to Win a State Title:

Dallas Jesuit (2017), Episcopal Dallas (2019), and The Woodlands (2018), are the last three programs to win a DI State title. And honestly, all three have the talent to push for a state title in 2021. So picking a favorite out of those top three is hard, but I’m ultimately going to go with the Rangers of Dallas Jesuit. Not only did I really like what I saw from them last season, where they went 4-0 and secured wins over both Episcopal Dallas and The Woodlands, but they have a heap of talent coming back that, at least now, leads me to put them ahead of the pack at the moment.

Junior midfielder McAllister Hobbs (Penn State commit), who tallied 12 points (10G/2A) during the 2020 season, looks to be even more of a leader on the offensive end, alongside seniors Sam Teachout (Johns Hopkins signee) Tilt Fernandes (Washington & Lee commit). Senior Henry Suarez (Saint Joseph’s signee) at the faceoff dot is another huge piece of this squad that will be returning, as well as junior defenseman Alex Chen (High Point commit) who should see even more action and production this season as a top pole.

Westlake has never won a state title or even made a state title game. However, they have knocked on the door, making multiple semifinal appearances over the past couple of seasons. After going 6-1 and securing wins over traditional state powers in Episcopal Dallas and The Woodlands, could 2021 be the year they get over the hump? Possibly, despite graduating some uber talented players off of last year’s squad.

The Chaps back end is highlighted by junior defenseman Carter Barksdale (Michigan commit) and senior LSM Christian Fournier (Army commit). Junior midfielder Ethan Burke (Maryland commit) highlights what is a pretty solid midfield unit for this squad, alongside seniors Brooks Jeffers and Ollie Lovell (Air Force commits). A 6-foot-7, 215 pound lefty, Burke tallied 44 points (32G/12A) as just a freshman in 2019 and has continued that level of play. This is a team that looks to be very formidable this season and should, at least, make another final four run

This one came down to two highly-touted seniors: Highland Park attackman Thomas Mencke (Virginia signee) and Episcopal Dallas midfielder Reed Landin (Duke signee). Both are absolute studs and have earned the right to be called not only the best offensive player, but the best overall player in the state coming into this season. However, I’m gonna go with Mencke on this one.

Rated as a four-star prospect and ranked as top-25 player in his class by Inside Lacrosse, Menecke makes his presence felt every time he steps on the field. Looking real comfortable around the cage as a shooter and feeder, Menecke operates great in tight spaces and can really be a pest for defenses. He led the Fighting Scots in points with 84 (42G/42A) while helping them to a title game appearance as a sophomore in 2019. He will be looking to end his high school career with a bang and on a high note this spring.

This spot is usually reserved for a close defenseman or LSM and the best specalist tag is either a faceoff man or goalie. But in this case, I’ve gotta go with a goalie: The Woodlands senior goalie Matt Nunes (Virginia signee).

Rated as a five-star prospect and ranked as the No. 3 player in the 2021 class, per Inside Lacrosse, Nunes is the definition of a playmaker at the goalie spot. Not only does he play a very polished game and can make clean saves from various spots on the field, but he is also a very strong outlet passer, often times looking like a QB putting passes on a rope. He is, without a doubt, the most impactful returner for The Woodlands this spring.

Texas has some real good players at the faceoff dot coming into this spring, but none better than senior Anthony Ghobriel (Navy commit) out of Highland Park. Rated as a four-star by Inside Lacrosse and a dual-sport athlete, also playing football for the Scots football team, Ghobriel plays a hard-nosed brand of lacrosse. He can get clean exits and also knows how to counter and come up with the possession even if he loses the initial clamp. In addition to his skills at the dot, he has shown the ability to make an impact on both ends at midfield if needed.