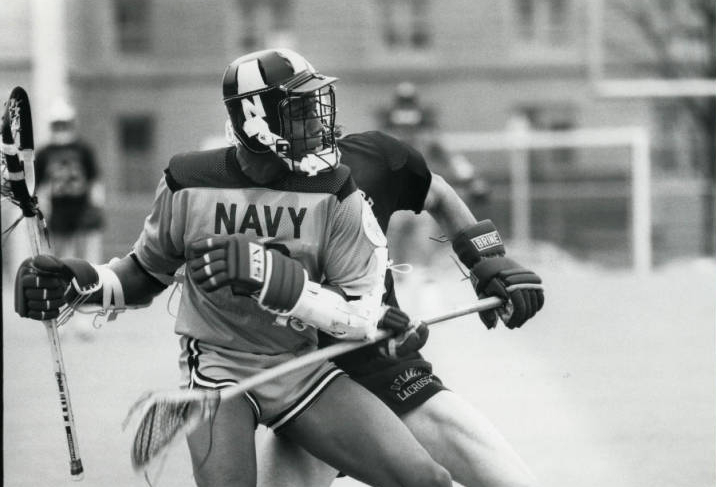 *This article is part of a month long series, Black Lacrosse Stories, that highlights Black players and coaches who have made an impact on our game, but may be lesser known to many younger players today.*

Everybody knows Jim Brown as being the first Black player to earn First Team All-American honors in DI lacrosse in 1957. But who was the second? The answer to that question would be Syd “The Squid” Abernethy who played at Navy from 1978-81 and earned the nickname “The Squid” for his signature head and shoulder fake.

A native of Annapolis, Md. and a product of Annapolis High School, where he played for Johns Hopkins alum Dave Roberts and was a high school All-American, Abernethy chose to stay home and follow his brother, Tom, down the street to the United States Naval Academy. While there, he played for Hall of Fame coach Dick Szlasa and despite following and playing with some of the best attackmen in Navy history, would leave a legacy of his own as one of the best at the position in program history.

During his freshman season in 1978, Navy went 11-3 and fell in the semifinals to Cornell. Abernethy didn’t see much clock and ended the season with just six points (4G/2A). But for the next three seasons he would start at attack for Navy and put numbers that still have him sitting as No. 12 all-time in career points in the history of Navy lacrosse.

During the 1979 season, where Navy fell in the NCAA semifinals to Maryland, Abernethy was part of one of the best attack lines in the country: Mike Buzzell, Mike Hannan, and Abernethy. Buzzell still sits atop the Navy record books in single-season points and is second all-time in career points. Hannan is a top-30 career point-getter in Navy history. That impressive attack line combined for 165 points, 37 of which (21G/16A) came from a sophomore Abernethy.

Even following Hannan’s graduation in 1979, Abernethy and Buzzell formed a dynamic duo at attack during the 1980 season. The two combined for 92 points, 42 (23G/19A) of which came from Abernethy.
While the 1979 and 1980 teams might have had more overall firepower on that attack line, 1981 was the best and likely most memorable season from Abernethy’s four years at Navy. As a senior, he was the man on offense and in turn had the best season of his career, leading the Midshipmen in points with 56 (39G/17A) to finish his career with a total of 141 points, which at the time would have been fifth all-time.

Abernethy and the Midshipmen had numerous memorable games during that 1981 season, but perhaps their two bouts with arch-rival Army are most memorable of that season and some of the most memorable of the four years that Abernethy suited up for the Midshipmen. The two arch-rivals met in their annual regular-season tilt in mid-April and then met for a second time in the NCAA Quarterfinals.

The regular season tout between the Black Knights and Midshipmen saw an injury-stricken Dick Edell-led Army squad deny Navy their 10th consecutive victory in the series, winning 9-8. During their NCAA Tournament meeting, the matchup of two First-Team All-Americans: Abernethy and Bob Henry, who had torn his hamstring earlier in the season, highlighted the contest. Abernethy scored three goals to help lead Navy to a 16-10 victory and a semifinal matchup with North Carolina, in which the eventual champion Tar Heels won 17-18. Abernethy had four goals in that contest and ended the 1981 NCAA Tournament with a total of 10 points (7G/3A), putting a bow on his career.

Following his legendary lacrosse career at Navy, Abernethy went on to serve our country in the United States Navy, where he retired in 2007 before working for multiple companies, including Boeing.

His name now sits in the Navy Athletics Hall of Fame.

One thought on “Black Lacrosse Stories: Syd “The Squid” Abernethy”