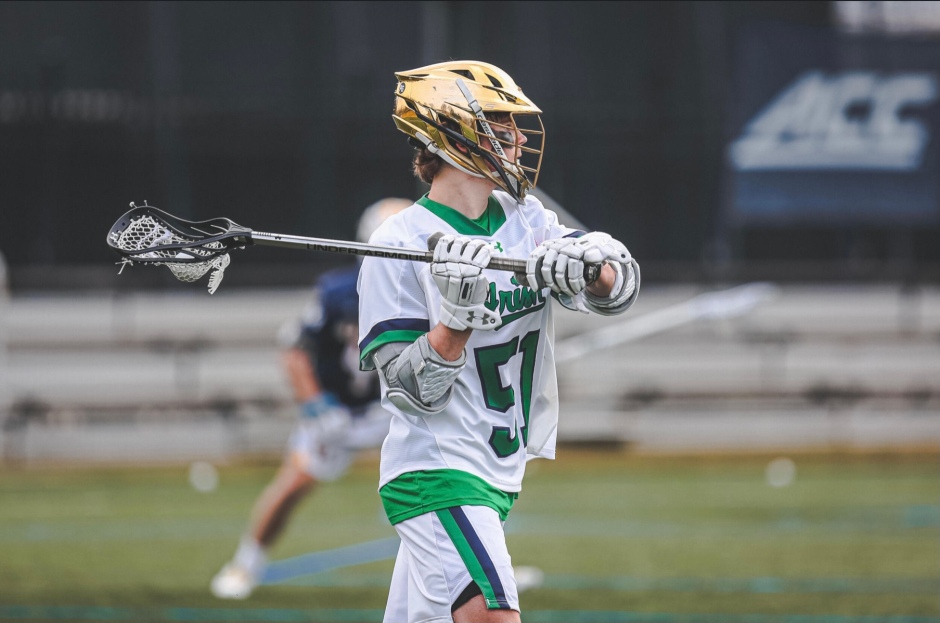 On Wednesday evening, the Notre Dame Fighting Irish took down the Marquette Golden Eagles 10-3 in a matchup between the two Midwest Catholic schools. Pretty fitting for St. Patrick’s day, right?

The Irish came out of the gates humming with nine different players finding the back of the net and ten different players notching at least a point in the blowout victory. While the Irish offense as a whole was seemingly unbeatable, it was Pat Kavanagh that was responsible for making that ball go ’round and the Notre Dame offense being as successful as they were.

Kavanagh, who has has often looked like the best feeder in college lacrosse this season, ended the day with five helpers and a goal, all of which came in the first half. Additionally, Will Yorke led the team in goals with two and Kyle Gallagher and Charlie Leonard combined to go 11-for-14 (78%) at the dot.

Coming out of the half with a 9-2 lead, the Irish and Golden Eagles only scored one goal each in the second half. Griffin Westlin put in the final goal for Notre Dame early in the third while Devon Cowan scored the Golden Eagles’ final goal of the game late in the third.

Liam Entenemann had one heck of a day in cage for the Irish, making career record 18 saves with an 86% save percentage. 10 of those 18 saves came in the second half where he got hot. Similarly, Sean Richard had a solid day for Marquette with 14 saves and a 57% save percentage.

In a meeting between crosstown rivals under the lights, the Fairfield Stags defeated the Sacred Heart Pioneers 14-8 on Wednesday night.

Dylan Beckwith further cemented himself as one of the best offensive threats in the CAA, putting up nine points (5G/4A) in the victory to lead the Stags. Three of those nine points came in the first 10:57 of the game when he found the back of the net twice and dished out an assist to help Fairfield out to an early 6-0 lead.

Additionally Frankie Labetti went 17-for-24 (70%) at the dot to give the Stags a fairly sizable possession advantage.

While Logan Liljeberg was held scoreless, Trevor Johnson stepped up led the way for the Pioneers with a hat trick as they were able to continuously answer the Stags form late in the first through the fourth. Sacred Heart was able to cut the Fairfield lead to a 8-6 at the half, but a three-goal run to start the third push the Stags back in front by five.

Fairfield was able to hang on through the Sacred Heart defensive effort and outscored the Pioneers 6-2 in the second half to secure the six-goal win.