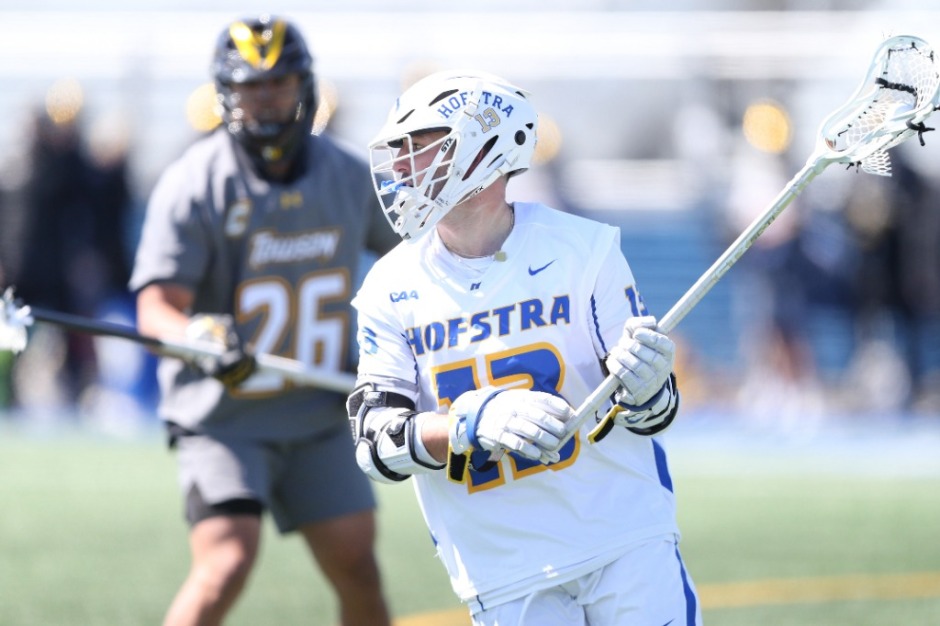 In a chaotic game with a chaotic ending, the Hofstra Pride walked away with a huge 12-10 road win over CAA rival UMass. The win comes just 10 days after the Minutemen bested the Pride in Hempstead in a midweek contest.

Ryan Tierney led the Pride offense with three goals and three assists for six points in the victory. And, as always, amidst Tierney’s point total included multiple highlight reel and jaw-dropping plays, including a cross-field bounce pass to Justin Lynskey early in the third.

Lynskey had two goals and two assists, including the final two goals of the contest for the Pride to create a two-goal cushion late in the contest. In addition to Tierney and Lykensy’s 10 combined points, Brian Herber went

UMass saw Kevin Tobin led the way with four goals and one assist for five points while Dillon Arrant and Billy Philpott each had two goals. Matt Knote anchored the Minutemen defense with 13 saves.

Down 2-1 early in the contest, Dillon Arrant put two home to push the Minutemen ahead and spark a five-goal run that allowed UMass to take a 5-2 lead at the end of the first and remain ahead 6-2 early in the second. And while the two sides traded runs for the majority of the second, Hofstra was able to catch a spark and go on a big run of their own.

Ryan Tierney scored the final two goals of the second quarter and the first of the third to pull the Pride back within one. Tierney then fed Lynskey and Riley Forte to extend Hofstra’s run and put them ahead for the first time since the 11:25 mark of the first quarter.

In addition to Brian Herber going 3-for-1 in the third quarter alone, the Hofstra defense stood tall and limited UMass to just one goal in the quarter. That lone third-quarter Minutemen goal came from Kevin Tobin at the 4:41 mark to tie things up at 9.

Billy Philpott put UMass back up by one early in the fourth and, for the longest time, Matt Knote had a lid on the cage. After four straight saves, including multiple right on the doorstep, Forte got one to go for Hofstra. Lynskey added two of his own, including a nifty back-hander, to push the Pride ahead 12-10. And while it looked like all that was left to be done was the final horn to sound, Mike Tobin fired a rocket to make it a one-goal game once again with 34 seconds on the clock.

Up two men with 16 seconds remaining, UMass got a shot off with seven seconds remaining but couldn’t convert. The next play, which came after a Hofstra timeout, the Pride were able to hold on and secure the win.

The win pushes Hofstra to 3-1 in CAA play and puts them in second place in the conference standings. UMass drops to 3-2 and third in the CAA.

In a stereotypical defensive-heavy MAAC contest, the Monmouth Hawks scored a road victory over the Detroit Mercy Titans.

The two squads traded runs throughout the first half, which saw Monmouth get ahead 7-5. Detroit Mercy outscored the Hawks 2-1 in the third quarter to make it a one-goal game heading into the final stanza. David Cormack put away the lone fourth-quarter goal to push Monmouth to victory, 9-7.

Cormack and Mike McIntyre each had two goals to lead the Hawks’ offense. Matt Soutar went 11-for-19 at the faceoff dot and Noah Lode made 14 saves in the contest. 11 of those saves came in the second half.

Brett Erskine led Detroit Mercy with two goals and an assist while Logan Shamblin made 11 saves in cage for the Titans.

With the win, Monmouth moves to 4-1 in conference play and remains atop the MAAC standings. Detroit Mercy moves to 3-2 in the MAAC and sits in fourth place in the conference standings.