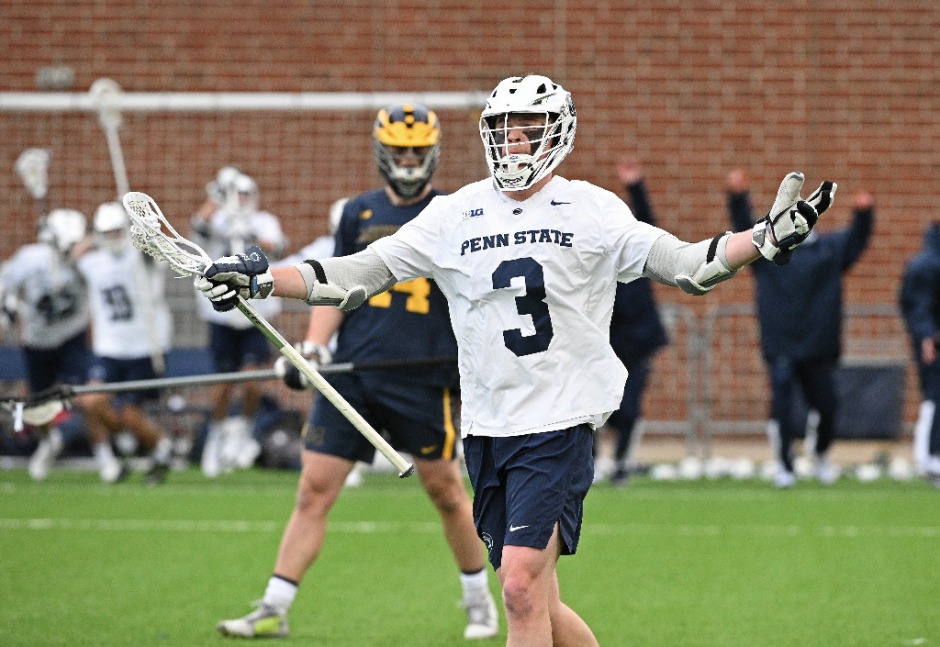 That was the sweet, sweet sound that came when Penn State fifth-year attackman Mac O’Keefe broke the NCAA career goals record of 212, which was previously held by Duke’s Justin Guterding, with his second goal of the contest.

But O’Keefe’s incredible senior night didn’t end there. The attackman tacked on four more goals and added two assists to finish the night with a season-high eight points. Among those, the game-winner that pushed Penn State past Michigan 14-13 in overtime and put O’Keefe’s career goal total at 217.

O’Keefe’s game-winner capped off a 6-1 run that began very late in the third to close out the contest and grab the win. Michigan had taken a 12-8 lead with under a minute left in the third thanks to a two-goal Wolverines run.

Dylan Foulds converted off a TJ Malone feed to put Penn State up 13-12 with 5:27 in regulation before Josh Zawada found Jacob Jackson with 2:33 left in regulation to stop the bleeding for the Wolverines and force overtime.

In addition to OKeefe’s eight-point performance, Penn State saw TJ Malone put up seven points (4G/3A) while Canyon Birch had two goals in his first-ever start to give Nittany Lions fans a glimpse into the future of this offense.

Josh Zawada and Avery Myers each had one goal and three assists for Michigan while Michael Boehm had a hat trick. Nick Rowlett went 15-for-30 at the faceoff dot.