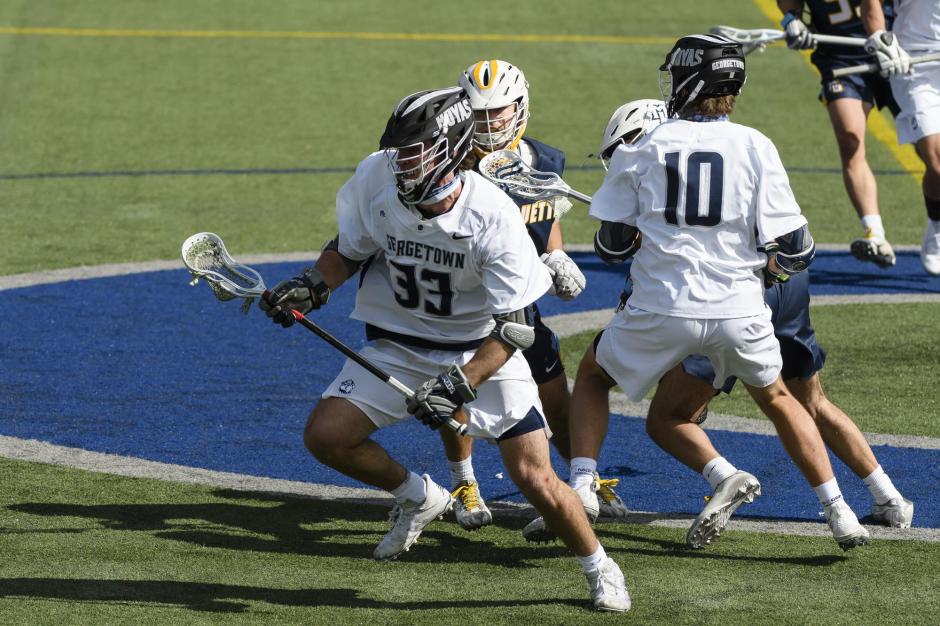 One month and a day after falling to the Denver Pioneers 13-7 in Denver, the Georgetown Hoyas got revenge on their Big East foes, taking down the Pioneers 11-10 in overtime in D.C. to earn their biggest win of the season.

Graham Bundy, Jr., found Declan McDermott open up top for the game-winner with 1:08 in the overtime period to secure the biggest win of the season for the Hoyas.

After trailing 6-4 at the half, in part due to a quick 3-0 Denver run to open the contest, the Hoyas answered every single third-quarter Pioneer goal with one of their own. Jack Hannah put Denver up 9-7 late in the third, but that would be the last goal for the Pioneers for almost a full 13 minutes as the Georgetown defense held Denver scoreless from the 2:19 mark of the third through the 2:38 mark in the fourth when Ethan Walker forced overtime.

During that nearly 13-minute stretch, the Hoyas three of their own to take their first lead of the game (10-9) before Walker tied it up and forced overtime. Both sides got a shot off in the final minute of the contest but neither could convert and win it in regulation.

James Reilly dominated the faceoff dot for the Hoyas, going 16-for-24 at the dot. Owen McElroy made 14 saves in cage and Dylan Watson scored four goals in the win.

Ethan Walker had a hat trick and an assist for Denver while Jack Thompson made 15 saves in cage.

A week after winning their first CAA win of the season against Fairfield and four days after earning a huge win over Hofstra, the Towson Tigers continued to wreak havoc on the CAA and took down UMass 9-6.

Towson rattled off three straight goals, including two from Ryan Swain, to start the contest and ended the first half on a 5-2 run that began with under a minute left in the first quarter to put them ahead 9-4 at the half.

Offensively, it was all UMass in the second half as Gabriel Procyk scored the lone goal of the third and Dillon Arrant had the lone fourth-quarter goal to make it a 9-6 final.

Shane Brennan recorded nine of his 13 overall saves in the second half to anchor the Towson defense and hold the Minutemen offense. Ryan Swain had a first-half hat trick to lead the Towson offense and James Avanzanto assisted on four goals.

Dillon Arrant had a hat trick for UMass and Zack Hochman went 17-for-19 at the faceoff dot. Matt Knote made 10 saves in cage, which included eight in the second half.

A week after suffering their first CAA loss of the season at the hands of the Drexel Dragons, the Delaware Blue Hens went into Hempstead and pulled out an overtime victory over the Hofstra Pride 14-13.

Charlie Kitchen found Tye Kurtz on the doorstep for the game-winner on the Blue Hens’ second possession of the overtime period. Not only did that goal end the game, but also stopped a three-goal Hofstra run in the last 49 seconds of regulation that saw Ryan Tierney force the overtime.

Hofstra had held a lead and never trailed all game until Delaware started the fourth quarter with a seven-goal run that saw Charlie Kitchen score four goals and put the Blue Hens in front 13-10 with 8:07 in regulation. Hofstra’s answered with their overtime-forcing run.

Charlie Kitchen led the game in scoring with nine points (6G/3A) while Tye Kurtz had four goals and two assists. Matt Kilkeary made 12 saves in the win, which included a point-blank save on the doorstep in overtime to extend the game.

James Philbin had four goals for Hofstra while Bobby Casey made 13 saves. Brian Herber went 17-for-27 at the faceoff dot.

In the second meeting of the season between these two Patriot League foes, the Navy Midshipmen defeated the Loyola Greyhounds 14-12.

After watching Navy take a 7-1 first-quarter lead and 10-4 halftime lead, Loyola collected themselves and put the pedal to the metal in the second half. The Greyhounds outscored Navy 3-2 in the third quarter, and their final two goals of the third provided the spark for a six-goal to tie things up at 12 with 4:59 left in the contest.

Jeff Durden broke the tie with a pole goal and Christian Daniel put in the final goal of the game to seal the win for the Midshipmen.

Christian Daniel led the Midshipmen with five assists and a goal. Jon Jarosz (2G/2A) and Dane Swanson (3G/1A) each had four points while Jack Sweeney netted a hat trick. Spencer Rees made 15 saves.

Evan James had four goals for Loyola while Kevin Lindley had three goals and an assist.

After finding themselves all knotted at 4 with the Utah Utes, the Virginia Cavaliers stepped on the gas. Eight consecutive goals from the 10:50 mark of the second through the 11:20 mark of the third, which saw Ian Laviano find the back of the net twice, pushed the Cavaliers ahead 13-6, and put them firmly in the driver’s seat.

Utah scored two late in the third and ended the game on a three-goal run to get to 11. Virginia’s last goal of the contest came at the 5:38 mark of the fourth to end a five-goal run and put them ahead by ten goals (18-10).

Xander Dickson (1G/3A) and Matt Moore (2G/2A) had four points apiece for the Cavaliers while Petey LaSalla went 20-for-26 at the faceoff dot and Alex Rode made 13 saves.

Carson Moyer had four goals for Utah while Zion Dechesere had 13 saves.

The North Carolina Tar Heels started the game on a 7-1 run and never slowed down as they blasted the home Syracuse Orange 21-9.

North Carolina took a commanding 12-4 halftime lead and continued to pile-on, going up 16-7 in the third quarter and finishing things off on a three-goal run to seal the deal. North Carolina’s 20 goals is the most Syracuse had allowed since 2006 when they fell to eventual national champion Virginia.

Chris Gray led the way for the Tar Heels with two goals and six assists for eight points while Alex Trippi and Jacob Kelly each had two goals and two assists. Zac Tucci went 15-for-23 at the faceoff dot.

Richmond Takes Control of The SoCon

Coming into Saturday, the Richmond Spiders and Jacksonville Dolphins were the only teams left standing unbeaten in SoCon play. Now, Richmond stands atop the rest after defeating Jacksonville 14-7.

Richmond took over from the start, taking a 2-0 lead in the first and tacking on four more goals to head into the half up 6-3. The Spiders turned it up a notch in the second half, outscoring the Dolphins 7-1 in the third quarter alone and using an 8-1 run to put this one away. Jacksonville ended the contest with three straight goals, including two power play goals from Matt Stagnitta.

Dalton Young had four goals to lead the Spiders’ offense while Richie Connell had three goals and an assist. Mitch Savoca and Tyler Shoults each had two goals and one assist. Jacob Griffin went 10-for-14 at the faceoff dot and Jack Rusbuldt made 11 saves.

Matt Stagnitta and Evan Tyler each had two goals and an assist to lead the Dolphins.

Three straight goals from Adam Charlambides help Rutgers crack the game wide open and sprint to a 17-11 victory over Johns Hopkins on Saturday night. Up until Charlambides’ three-goal run that sparked a six-goal, game-ending run for the Scarlet Knights, neither team ever gained more than a three-goal lead all contest.

Johns Hopkins ended the first quarter on a three0-goal run to tie things up at 4 and Rutgers was able to get ahead 8-6 at the half. A Cole Williams goal was the final one for the Blue Jays to tie things up at 11 before the Scarlet Knights went off late.