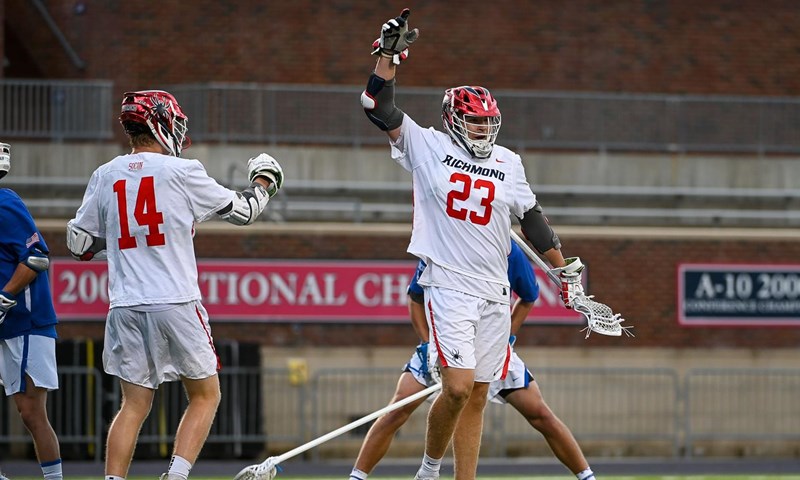 For the seventh consecutive (full) season, the Richmond Spiders have advance to their conference championship game. This time, the Spiders aren’t looking to only defend their title, but do it for a third time in a row and become the first three-peat champion in SoCon history.

The Spiders took down the Air Force Falcons, whom they had just fallen to 9-8 in their regular season finale just four days prior, 11-6.

Anchored by a 12-save performance in cage by Jack Rusbuldt, the Spiders’ defense caused 13 of the Falcons’ 18 turnovers and never allowed more than two goals in a single quarter. Sean Menges led the way as the Spiders’ top pole, causing four turnovers and scooping up four ground balls.

After Air Force made it a one-goal (4-3) game early in the second, the Spiders rattled off six straight in a run that lasted through the midway point of the third quarter to help push them ahead 10-4 heading into the fourth and run away with the contest.

Ben Ward had a hat trick for Air Force and Ethan Grandolfo had two goals and an assist.

Kevin Rogers first goal of the contest at the 14:04 mark of the first quarter wasn’t only the Panthers’ first goal of the day, but served as the spark for a 10-goal run that pushed High Point ahead 10-1 midway through the third quarter. The Dolphins put together an aggressive late-game comeback effort, outscoring the Panthers 8-1 in the final 21 minutes of the contest but ultimately fell short of a full comeback.

Kevin Rogers and Brayden Mayea each had three goals to lead the Panthers while Asher Nolting had one goal and three assists. Parker Green made 11 saves in cage.