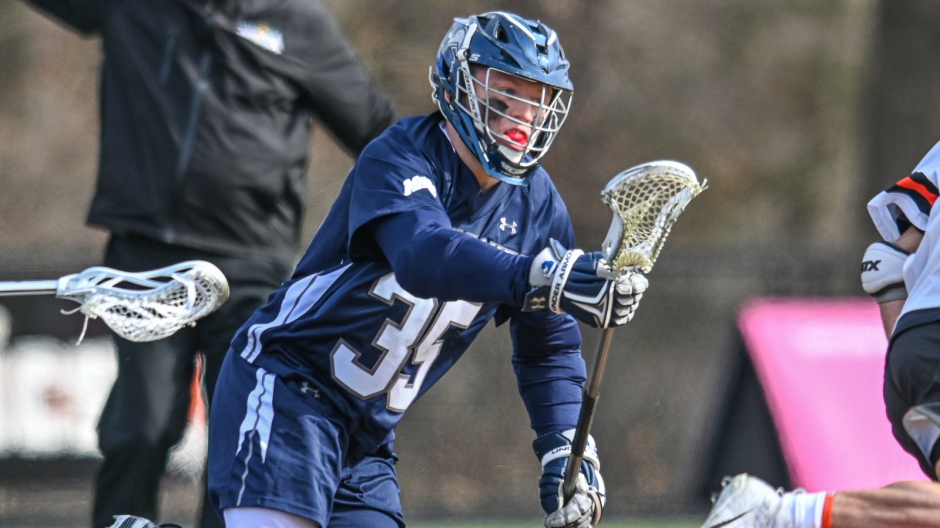 The Monmouth Hawks are heading back to the NCAA Tournament for the first time since their first-ever trip in 2017 after taking down top-seeded Manhattan 14-9 in the MAAC Title game on Saturday afternoon.

Despite committing 21 turnovers in the contest, Matt Soutar going 20-for-27 at the dot gave Monmouth an upper hand. The Hawks also caused seven of Manhattan’s 12 turnovers.

Cade Stratton was an all-around playmaker for the Hawks in the victory, tallying six points off three goals and three assists while also scooping up four ground balls and two caused turnovers.

The Monmouth defense, which was anchored by a 10-save performance from Noah Lode, held the Manhattan offense for nearly 10 minutes in the fourth quarter following the Jaspers cutting the Hawks’ lead back to three.

Kyle Gucwa led Manhattan with four goals and an assist.

Bryant took down the top-seeded Saint Joseph’s Hawks to end their nine-game win streak and continue the now seven-season trend of the No. 1 sed failing to win the NEC Tournament. The win marks Bryant’s first conference title and trip to the NCAA Tournament since 2017.

Following a tight first half that saw each team go on consecutive runs and ended with the Hawks ahead 6-5, Bryant blew things open in the second half and took control of the contest. After Saint Joseph’s tied things up at 9 in the third to answer a Bulldogs’ three-goal run, Bryant exploded for a 7-1 run that lasted from the final minute of the third through the final buzzer.

Marc O’Rouke, who led the Bulldogs’ offense with four goals and an assist, had two goals during that game-clinching run.

Jacob Alexander played Saint Joseph’s Zach Cole as well as anyone has this season, going 17-for-30 at the dot. He went 10-17 in the second half alone. Luke Caracciolo also had a big day, making 18 saves to anchor the Bryant defense.

The Drexel Dragons are heading back to the NCAA Tournament for the firs time since their firs trip in 2014, which ended in a quarterfinal loss to Denver, after taking down Hofstra 15-11 to win the CAA title and getting over the hump after making the postseason four of the past five full season.

While the final score shows a five-goal win for the Dragons, this one wasn’t that close at all. Drexel started the game on a 10-1 run with Hofstra’s only goal coming from Ryan Tierney early in the first to make him the all-time CAA goals leader.

Tierney put in the final goal of the first half to make it a 10-2 game and the Pride were able to rattle off two more to open the third. While the Pride did outscore the Dragons 9-5 in the second half, putting together a complete comeback proved to be an unattainable task.

Reid Bowering led Drexel with five goals while Luke Tomak had two goals and three assists for five points. Ross Blumenthal made 11 saves in cage to anchor the Dragons’ defense.