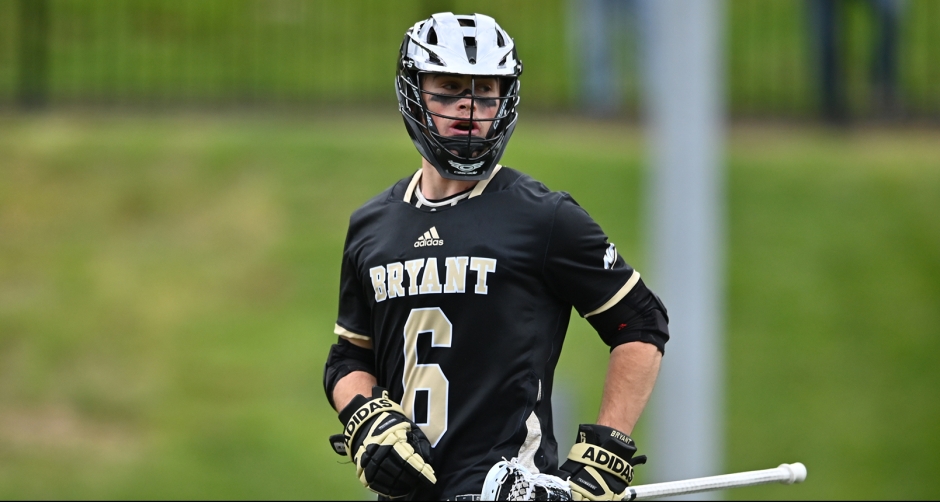 The Bryant Bulldogs joined the NEC in 2010 and have only missed one conference tournament once (2019). In addition, they have won five NEC titles (2012, 2013, 2014, 2015, 2017) and made four NCAA Tournament appearances as a DI program, which includes their historic upset over Syracuse in the first round of the 2014 tournament.

After getting pummeled by Robert Morris, 12-5, in the NEC semifinals in 2018 and a program-worst campaign in 2019 where they went 3-11 and missed the postseason entirely, Mike Pressler’s squad returned to their winning ways in 2021. The Bulldogs went 9-4 (5-2 NEC), took down top-seeded Saint Joseph’s, 16-10, in the NEC title game, and gave the eventual national champion Virginia a scare in the first round of the NCAA Tournament, leading 10-8 late in the third quarter before a five-goal Virginia run helped the Cavaliers escape their home turf with a 13-11 victory.

Bryant reclaimed their place atop the NEC in 2021, and they did so during a season in which they faced as much adversity as any team in the nation. The Bulldogs went through three separate pauses due to COVID-19 protocols and during their regular-season meeting against Saint Joseph’s in mid-April only had one available goalie – freshman Teagan Alexander. On top of that, Mike Pressler’s squad fought the injury bug all season, which included missing star attackman Marc O’Rourke for the first eight games.

Absolutely nothing could faze this Bryant squad. Even the national champs struggled to keep the leash on the Bulldogs.

In 2022, Bryant has a target on their back as defending NEC champs. And while the Bulldogs will undoubtedly face some very tough challenges, especially in conference against the likes of Saint Joseph’s and others, it’s hard to look at all that Bryant returns and not think they could repeat as conference champions and possibly put together a similar or even better season than last spring’s, especially if they can stay healthy.

A big part of Bryant’s success in 2021 was due to their elite play in the middle of the field as their poles weren’t afraid to get out and run and create havoc in between the boxes. The Bulldogs ended the season with a clearing percentage of .884%, converting 251 of their 284 attempts. That is good for eighth-best in the nation. Coupled with their success in the clearing game, Bryant ended the year ranked 27th in caused turnovers per game (8) and fourth in ground balls per game (35.85).

With LaJohn Jones (31GB/15CT) and Brody Rule (25GB/13CT) back to lead the Bulldogs’ close defense unit after putting together stellar freshman campaigns in 2021, and sophomore SSDM Jon Miller (19GB/6CT) returning to lead the way at the defensive midfield spot, Bryant has a young defensive core that is not only experienced but could continue the success they had both on the back end and in transition last season. The Bulldogs have also added a pair of transfers who could be plug-and-play type guys on the back end in defenseman Henry Watson from Ohio State and LSM Connor Whalen from Maryland.

Additionally, the Bulldogs return Luke Caracciolo in cage. The junior made 147 saves with a 52% save percentage to anchor the Bryant defense. Sophomore Teagan Alexander is a solid backup, having to play and start in one game last season and holding his own with 17 saves and a 56% save percentage despite the loss.

Bryant does have some losses on the back end with defensemen Ryan Baker, Zach Coffey, and LSM Jake Fiske all graduating after being top-five producing poles for the Bulldogs this past season. However, with what the Bulldogs’ young core showed last season there is no reason to think that the Bryant defense will take a massive dip in 2022, whatsoever. If anything, they should continue trending upwards and at the least, see similar production to last season, especially when it comes to their play in between the boxes.

Faceoff success was another crucial piece of Bryant’s ability to win in the middle of the field consistently last season. Nathan Laliberte started the year at the faceoff dot and went 82-for-137 (59%) through eight games before suffering a torn ACL against Sacred Heart. Jacob Alexander stepped up mid-season and took over as the Bulldogs’ primary faceoff man, going 128-for-221 (57%) in 11 contests.

Similarly, the Bulldogs also return a heap of talent on the offensive end of the field with each of their top-five scorers back from a year ago. Marc O’Rouke missed most of last season with myocarditis but was stellar in the final five games of the season, tallying 25 points off 21 goals and four assists. As a fifth-year senior, O’Rouke will be the leader and focal point of this offense just as he has since he stepped foot in Providence as a freshman.

Attackmen Logan McGovern (20G/26A), who led the team in points with 46 as a redshirt freshman in 2021, and Bennett Albadian (29G/8A) both return after being primary starters. Attackman Kevin Groeninger (10G/9A) and midfielder Aidan Goltz (16G/2A) also return after being the Bulldogs’ fourth and fifth-leading scorers this past spring. The aforementioned group of four provides not only an experienced supporting cast around O’Rouke but a young one that still has plenty of room for growth.

Ranking 22nd in scoring offense (20.23 points per game) and 48th in man-up offense, converting on 27% of their opportunities last season, this Bryant offense has the potential to take a pretty sizable jump in 2022. That is especially true with a fully healthy O’Rouke for a full season. After igniting an offense with 25 points in just five games last season, what a full season could look like for the fifth-year senior – especially after having to fight through as much adversity as he and this team as a whole did in 2021.