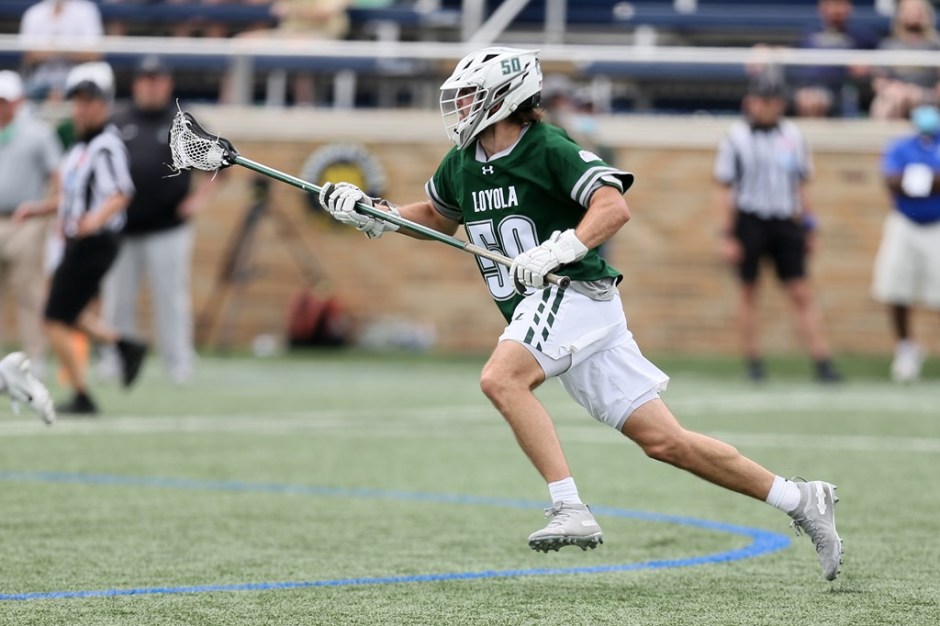 The 2021 season was quite the ride for Charley Toomey and the Loyola Greyhounds. Sitting at 5-5 heading into the second-to-last weekend of the regular season, Loyola had not only garnered a reputation as one of the most inconsistent teams in the nation, but the Patriot League power was sitting pretty firmly outside the NCAA Tournament conversation. However, when they needed it most, the Greyhounds hit a hot streak. One of the most memorable of the year, at that.

Loyola took down Lafayette 11-7 on April 24th in a contest that was a little too close for comfort for many Greyhound faithful. They followed up that performance with a major, 11-9, upset over No. 6 Georgetown to end the regular season and gain momentum heading into the Patriot League Tournament. Wins over top-20 teams in Navy and Army West Point in the conference quarterfinals and semifinals gave the Greyhounds two more signature wins and punch their ticket to the Patriot League title game. However, a positive COVID test within the Greyhounds program caused them to withdraw from the contest and put their NCAA Tournament chances in even more limbo.

On Selection Sunday, the Greyhounds name was ultimately called as an at-large selection with them being paired against No. 7 Denver. The Pioneers had home-field advantage in the first round of the NCAA Tournament, but it would be Loyola leaving the field victorious as Sam Shafer made the save of the year to seal the deal, 11-10, in the final seconds of regulation. The Greyhounds then lost, 10-9, in overtime against Duke in the NCAA Quarterfinals to close out what was truly as wild of a season as any.

The Greyhounds made their third consecutive NCAA Quarterfinal trip in 2021 but came up short in getting back to Championship Weekend for the first time since 2016. Looking forwards toward 2022, with the talent and experience they return on both ends, Loyola looks to be not only one of the top Patriot League title contenders but also a serious contender to get to Championship Weekend and possibly be the last team standing on Memorial Day.

A big reason for the level of optimism around this Loyola program coming into the 2022 season is due to how much talent they bring back. That includes 10 fifth-year returnees.

Where the majority of those returnees can be seen is on the defensive end, where the Greyhounds ended the season with the 10th-best scoring defense in DI (9.81 goals allowed per game). Loyola will see four of their top players from that top-10 defense return for a fifth season in LSM Ryan McNulty, defensemen Matt Hughes and Kyle LeBlanc, and goalie Sam Shafer.

Shafer stepped into a starting role for the first time in his college career during the shortened 2020 season and continued in that role this past spring. He made 150 saves with a .534% save percentage while anchoring the Greyhounds defense.

In addition to those aforementioned fifth-year returnees, the Greyhounds also returns a three-year starter in Cam Wyers, who grabbed 54 ground balls and caused 19 turnovers this past spring. Payton Rezanka (27GB/5CT) is the Greyhounds’ top returning SSDM. He put together the best season of his career playing alongside Matt Higgins in 2021 and looks to be the leader of what should be a strong stable of defensive midfielders this coming spring.

Loyola will also see a number of impact players return on the offensive end of the field, where the Greyhounds ended the season ranked 24th in scoring offense (12.31 goals per game), 21st in shooting percentage (.301%), and 20th in assists per game (7.31). Loyola also had a top-30 man-up offense last season, cashing in on .339% of their opportunities.

Coming into 2022, the Greyhounds return four of their top five scorers from a year ago, including fifth-year attackmen Aidan Olmstead (31G/29A) and Kevin Lindley (42G/8A). The pair have been impact players for this offense for multiple years now, and the leaders of this unit in the immediate post-Pat Spencer era of Greyhound lacrosse. Returning the pair is massive for this offense, which progressed a good deal from start to finish last season.

Midfielders Evan James (32G/12A) and Adam Poitras (11G/11A) also return to lead the Greyhounds’ offensive midfield unit following successful campaigns in 2021. Additionally, junior attackman Joey Kamish will be back following a sophomore campaign this past spring that was hampered by injuries. After starting every game at attack and being a top-five scorer as a freshman in 2020, the Michigan native was held to just five games and two starts this past spring. He had 14 points off nine goals and five assists.

With the aforementioned four playmakers back, as well as Kamish, and with the number of role players that saw limited action and could take a step forward, this Greyhounds offense should stay amongst the best in the Patriot League and could very climb back up the charts and get close to where they were during that 2019 season.

Loyola also returns faceoff man Bailey Savio for a fifth season with the Greyhounds. Savio went 178-for-344 (.527%). He also scored two goals during the 2021 campaign.

One thought on “Loyola Has Championship Weekend Potential in 2022”