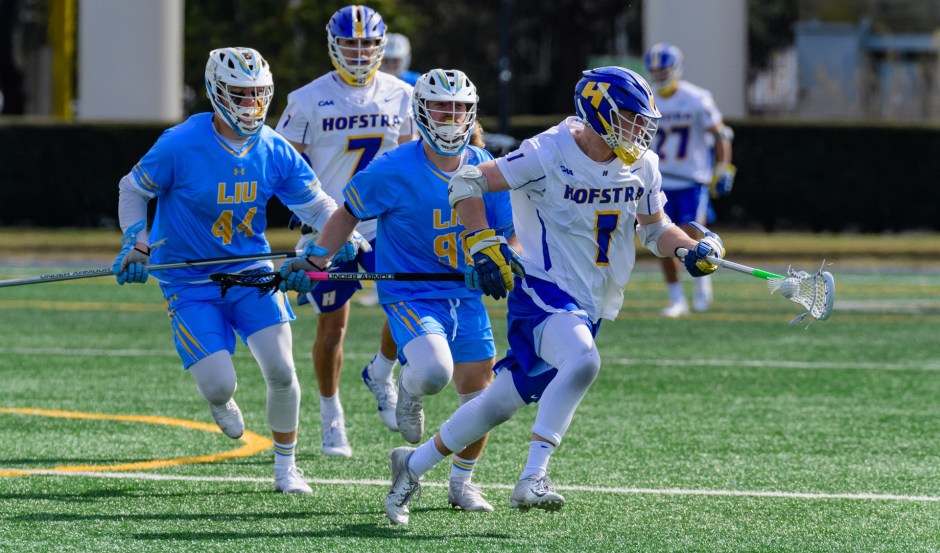 Ahead of last season, Hofstra hadn’t enjoyed a full winning season since 2017 and in the midst of a nine-year (eight full seasons) streak of not making the NCAA Tournament after doing so in four of the first five seasons of the Seth Tierney.

The Pride didn’t break that now-decade old streak, but 2021 did see Hofstra churn out a winning season and come within four goals of an NCAA Tournament berth as the Pride went 8-6 (4-4 CAA). They upset top-seeded Delaware, 10-9, in the conference semifinals before falling to Drexel, 15-11, in the title game. To add, Hofstra suffered two one-goal losses (St. John’s, Delaware) and one two-goal loss against Towson during the regular season.

In addition to the wins and losses, Hofstra featured the 21st best scoring offense in DI, averaging 13 goals per game, while also having the second-best clearing percentage (.904%) and the eighth-best faceoff win percentage (.637%) in the nation.

CAA Offensive Player of The Year and First-Team All-Conference selection, and Second-Team USILA All-American Ryan Tierney was the face of this Pride squad last season as he led his team, and the conference, with 61 points off 41 goals and 20 assists. The redshirt senior finished his Hofstra career atop the record books in multiple categories.

Hofstra was as strong as they’ve been in quite some time last spring. But as is often the case with mid-major squads, Seth Tierney will be heading a squad in 2022 that looks like it will be in full-on rebuilding mode with as much talent as it loses from last season.

The only area where this Hofstra squad looks like they could find similar, or more, success than last season is at the faceoff dot. Brian Herber, who will be coming back for a fifth season, churned out the best campaign of his career in 2021, going 192-for-302 (.636%). He ended the season ranked seventh in DI in faceoff percentage, and was first in the CAA.

Herber will be the X-factor for this Pride team in 2022, and if he can have even a fraction of the success he had last season, the chances of this Hofstra squad possibly overachieving, despite all their losses, will likely go up.

In addition to Herber and what he brings at the faceoff dot, Hofstra will also return a pair of playmakers at the midfield in James Philbin (20G/5A) and Justin Sykes (12G/5A). The duo combined for 42 points last season and will likely be the leaders of this offense in 2022. Philbin is the eldest star on offense, returning for a fifth season in Hempstead, while Sykes is coming into his third year with the Pride after being a very valuable asset through two seasons, in which he has seen action in 21 games with 15 starts.

Attackmen Dylan McIntosh (10G/2A), who is returning for a fifth season, and Ryan Sheridan (9G/2A) are the only other top-10 point-getters returning for this offense from last season. McIntosh was a full-time starter in 2018 and 2019, only missing six games due to injury as a sophomore, before only seeing action in 11 games with seven starts over the past two seasons. Sheridan has played in 19 games with four starts through his first two years in Hempstead.

Ohio State transfer Gerard Kane could also see significant time this season. The 6-foot-2, 225-pound lefty out of the Peach State was rated as a four-star and ranked as the No. 99 player in the 2020 class by Inside Lacrosse coming out of high school and could be a huge asset to this Pride offense if he does indeed live up to the hype he has received due to the decorated high school career at Lambert (Ga.).

Additionally, the Pride brought in a large freshman class that features 13 players on the offensive end, any number of whom could step up and be solid contributors this spring.

Similarly, Hofstra has many of the same questions on the defensive end of the field where close defenseman Tom Ford (13GB/11CT) is the only returning full-time starter from a unit last season that allowed an average of 11.6 goals per game last season. That includes five contests in which the Pride held their opponents to single digits. SSDMs Corey Kale (10GB/5CT) and reserve defenseman Daniel Ochs (10GB/4CT) are the next two top returners out in front of the cage on the back end.

In cage, the loss of a three-year starter in Bobby Casey is huge. However, the Pride do return a capable goaltender in Mac Gates, who does have starting experience. Gates stepped in as the starter for the first four games of the 2021 season while Casey was out with an injury and found some success, making 44 saves with a .478% save percentage. The Pride went 3-1 during that stretch.

Defensive coordinator John Gorman has some big decisions to make this fall, and as the season nears, with not too much experience returning anywhere on the back end for this Pride squad in 2022. However, the Hofstra alum found success in his prior stop at Rutgers and during his first stop at Hofstra, so it wouldn’t be too surprising if this defense does put up better numbers than expected – especially with a somewhat proven commodity likely to be the starter in cage.

And if Herber does indeed have the same success as he did last season at the faceoff dot, that could take a load of this defense.

One thought on “2022 Looks Like a Rebuilding at Hofstra”