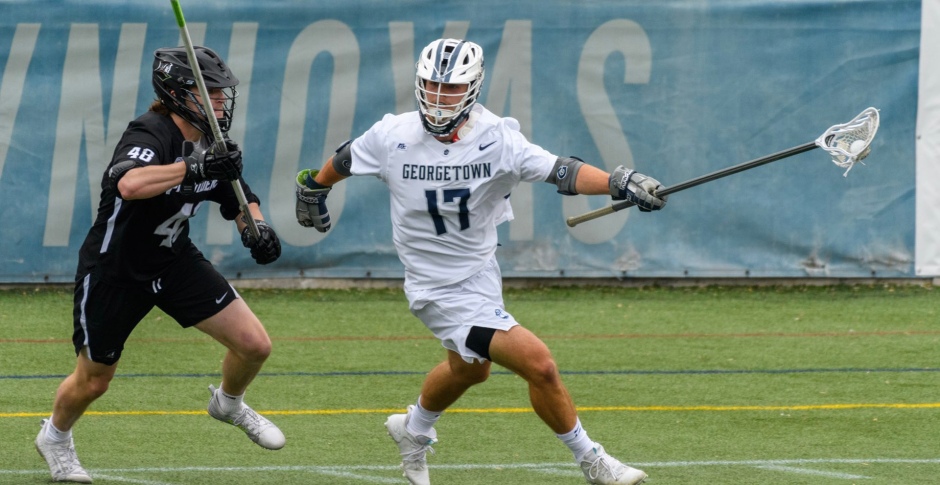 On the opening play of Hoyas’ NCAA Quarterfinal contests against eventual national champion Virginia, faceoff man James Reilly drew a flag when pushed in the back by Virginia LSM Jared Conners. Reilly would take only one more faceoff before subsequently leaving the game with a lower-body injury. The Hoyas were unable to capitalize on the ensuing possession following the push on Reilly, where they eventually went two men up following another Cavalier penalty.

That opening possession ended with Virginia goalie Alex Rode stoping a Nicky Petkevich shot from the left wing, and would set the tone for what kind of game would following for the Hoyas as they fell 14-3. However, the sour ending was in no way indicative of what kind of season it was for the Hoyas, how far they’ve climbed in a few years, or where they are headed.

Georgetown churned out their best season ever under Kevin Warne in 2021. The Hoyas went 13-3 (9-1 Big East), won the conference tournament and made the NCAA Tournament for the third consecutive full season, and advanced to the NCAA Quarterfinals for the first time since 2007.

Kevin Warne has indeed revitalized Georgetown lacrosse, bringing the Hoyas back from the basement of the Big East to regular contenders both within their conference and on the national level. The only thing Warne hasn’t done that his predecessor, Dave Urick, who led the Hobart dynasty in the ’80s prime before building up Georgetown, accomplished is a Championship Weekend berth.

Heading into the 2022 season, Georgetown will not only be looking to four-peat as Big East Champions but also take that next step as a program and earn the right to play on Memorial Day weekend.

Georgetown continued their recent trend of trotting out top-tier defenses, ranking first in DI in scoring defense (8.31 goals allowed per game) and first in man-down defense as they came up successful in .829% such situations last season. And it doesn’t appear that this Hoyas’ unit will take a step back at all this spring.

The Hoyas will house two of the best defensemen in the nation with Gibson Smith returning for a fifth season and Will Bowen transferring in from North Carolina. Smith is coming off a 2021 campaign in which he missed all but one game during the first two months of the season due to injury. Assuming he stays healthy for a full season, the four-year starter is expected to continue playing at the level he has since he first stepped foot on campus. Bowen comes to the nation’s capital following two strong seasons with the Tar Heels, including a 2021 campaign that ended with an NCAA semifinal loss against Virginia.

Smith and Bowen join forces to create one of the best defensive duos we’ve seen in college lacrosse in recent memory. This two-headed monster will keep opposing defensive coordinators up at night.

In addition to the two aforementioned poles, Georgetown also returns junior James Donaldson (15GB/9CT) and sophomore Will Tominovich (23GB/9CT) at close, as well as senior LSM Alex Mazzone (32GB/16CT). Donaldson has started all 22 games over the past two seasons while Tominovich saw action in all 16 games last season as a freshman and saw 10 starts, including the final three games of the season. Mazzone led the team in caused turnovers last spring and has been an impact player the past three seasons, playing LSM the last two.

In between the pipes where Owen McElroy returns for a fifth season of college lacrosse. A New Jersey native, McElroy has started each of the last 38 games for the Hoyas and asserted himself as one of the best keepers in the nation. He is coming off a 2021 campaign where he made 172 saves with a .583% save percentage. McElroy ended the year ranked 5th nationally in save percentage.

With the duo of Smith and Bowen highlighting this unit and McElroy returning to anchor things on the back end once again, as well as the numbers of players the Hoyas can deploy all over the field on that end, there is no reason to think that this defense can’t put up similar or better numbers than they did last season. In fact, Georgetown could have the No. 1 defense in college lacrosse once again.

Things look very similar on the other end of the field where the Hoyas lose 68 points from a year ago with the loss of program great Jake Carraway, as well as 41 points from Colgate grad transfer Nicky Petkevich, but return enough talent to suggest this unit won’t drop much, if that drop at all, in 2022.

TJ Haley is Georgetown’s top returning point-getter following a freshman campaign in which he started and played in all but one game and was the Hoyas’ second-leader in points with 54 (5G/49A) and was named the Big East Freshman of the year. In addition to the quarterbacking attackman, Georgetown returns a pair of start midfielders in Graham Bundy, Jr., (36G/12A), and Declan McDermott (24G/9A). The now junior and senior were the Hoyas’ third and fourth-leading scorers last season.

Attackman Dylan Watson (20G/7A), who missed the first two months of the season with an injury, and sophomore midfielder Dylan Hess (17G/7A), who shined as a two-way threat last season, both return to add to what should be a deep offensive unit this spring. Graduate midfielder Colin Munro (8G/3A) also returns after being one of the Hoyas’ top reserves at the position last season.

Former North Carolina attackman Alex Trippi also joins this Georgetown offense, which ranked 20th nationally last season in goals per game (13.12). Trippi appeared in 50 contests with nine starts during his four years in Chapel Hill and was the Tar Heels’ seventh-leading scorer last season with 25 points off 13 goals and 12 assists.

James Reilly returns as the Hoyas’ primary option at the faceoff dot. Reilly went 179-for-307 (.583%) last season. That included a 66% performance against Denver, where Reilly was tasked with going against Alec Sthatikas and TD Ierlan.