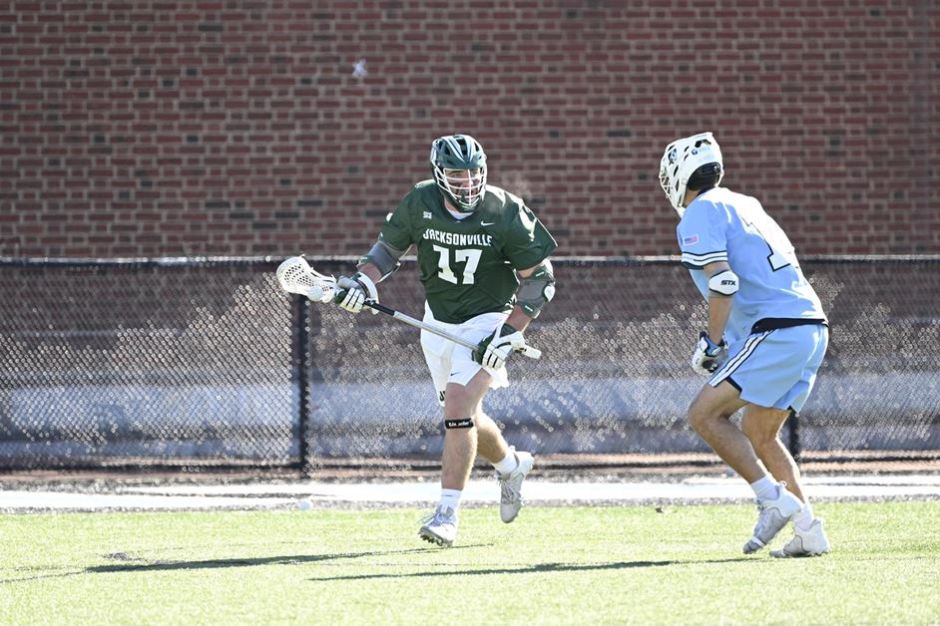 The Jacksonville Dolphins went into Durham and took home their biggest win in program history, beating the No. 2 Duke Blue Devils 14-12.

After a Max Waldbaum goal in the final seconds of the first knotted things all up at 4, Nakeie Montgomery answered for Duke to put them back in front with 9:26 left in the first half. That would be the last lead the Blue Devils would see as day.

The Dolphins went on a game-changing, six-goal run from the 7:34 mark run in the second through the 7:27 mark in the third to take the 10-5 lead. Waldbaum and Jack Dolan combined for four of those six Jacksonville goals during that run.

Five of Luke Millican’s 10 saves on the day were made during that run. He made a seven total saves in the second half alone.

Garrett Leadmon ended the Blue Devils’ drought late in the third and Joe Robertson put in another to make it an 11-7 game heading into the fourth. Duke won that final stanza, 4-3, and went on to finish the game on a 5-1 run, but the Dolphins were able to stave off the Blue Devils and secure the upset win.

Millican anchored the Dolphins’ defense while on the other end it was Max Waldbaum who led the way. The former Tufts Jumbo continued his strong start with Jacksonville, putting up six points off four goals and two assists.

Brennan O’Neill led Duke with four points off two goals and two assists while Mike Adler made 16 saves in cage to anchor the Blue Devils defense.

At the faceoff, it was a constant battle between Jacksonville’s Nathan Kapp and Duke’s Jordan Ginder. Each went 15-for-30 (50%).

For a minute it looked like a second SoCon team was on its way to taking down an ACC opponent as the High Point Panthers proved to be a thorn in the side of the Virginia Cavaliers for a full 60 minutes of play. But the Cavaliers were able to escape with the home victory, thanks to a clutch game-winning save from Matthew Nunes.

With less than 20 seconds remaining and following a wild sequence that saw High Point goalie Parker Green run over the midline, Nick Rizzo got off what would be the final shot for the Panthers. Nunes deflected it, and a crease violation called on Rizzo meant possession changed back to Virginia and the Cavaliers were able to run out the final seconds and escape with a narrow, 11-10, victory.

This game was tight nearly the whole way with the two sides being tied four times throughout the game, including a 2-2 score at the end of the first and a 6-6 score with 9:31 in the third after a Michael Ippolito goal that gave the Panthers their second goal of the second half.

Virginia followed that Ippolito goal with four of their own to help them push out to a game-high, four-point (10-6) lead late in the third. High Point outscored Virginia 4-1 in the final 16 minutes of the game, but the Cavaliers were able to weather the storm and not let the Panthers come all the way back.

Connor Shellenberger led the Cavaliers with six points off five goals and an assist while Matt Moore netted a hat trick.

Petey LaSalla went 21-for-27 at the faceoff dot for the Cavaliers and Nunes ended with 16 saves.

Asher Nolting had two goals and three assists to lead the Panthers.

Despite missing attackman TJ Haley, the Georgetown Hoyas took care of business in their season opener on Sunday afternoon as they beat the Johns Hopkins Blue Jays 16-8.

After being down 5-2 at the end of the first quarter, the Hoyas kicked it into high gear. Georgetown blanked the Blue Jays in the second quarter of play and ended the game on a 14-3 run from the final seconds in the first through the final buzzer.

The two-headed monster of Gibson Smith and Will Bowen combined for 11 ground balls and two caused turnovers whole Owen McElroy made 17 saves in cage. Dylan Watson had six goals to lead the Hoyas’ offense.

Connor DeSimone had one goal and three assists to lead Johns Hopkins with four points.

The Raiders might have won the second half, but North Carolina didn’t have too much trouble getting past Colgate late Sunday morning as they took come the 15-9 win.

North Carolina took a strong 7-1 lead at the end of the first quarter before adding on to get up 12-4 heading into the half. The Tar Heels added three more goals in the final two frames as they sprinted to victory.

A big part of the Tar Heels’ victory was their success in the riding game, holding the Raiders to 17-for-20 in clearing. That holding Colgate to just 4-for-7 in the first half.

Michael and Brian Minicus each had four points off three goals and one assists for the Raiders.