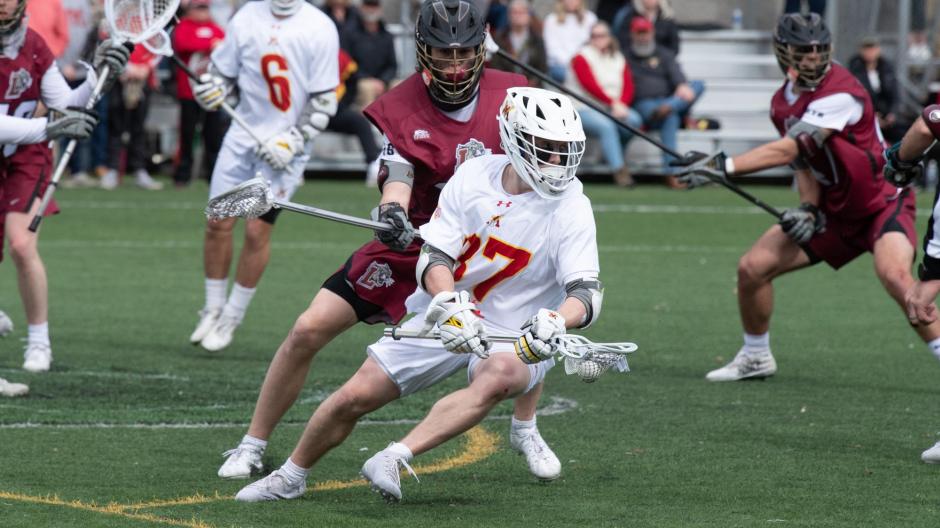 In a Presidents Day matchup between two SoCon foes from Old Dominion, the VMI Keydets took down the Hampton Pirates on the road 15-6. The contest counts as a non-conference game and the win if the first of the season for the Keydets.

These two will meet again in late April in Lexington for a contest that will count as a conference game.

Luke Mryncza put in the first two goals of his college career in the final 34 seconds of the contest to get the Keydets to 15 and cap off a game that VMI had in firm control for a majority of play. Mryncza’s two goals also extended the Keydets’ game-ending run to five goals.

The Keydets’ game-ending run was their second five-goal stretch of the contest as they also put up five straight in the first half to help them get ahead 5-3 at the intermission. That run also helped them answer a fairly strong opening from Hampton as Miles Fawcett and Steele Downing scored the first two goals of the contest to put the Pirates up 2-0 within the first nine minutes of the game.

Luke Rusterucci and Hartley Jordan each had a goal and an assist during that first half run for the Keydets. Rusterucci ended the day as their leading scorer with six points off three goals and three assists while Jordan had two goals and one assist for three points.

Hampton was able to keep things within three early in the third with a Dylan Robinson goal off a Miles Fawcett assist. Lonnie Jones’ lone goal off a Jonathan Angel assist with 12:51 in regulation was the final score of the contest for the Pirates before VMI broke things open late.

Hampton won the battle at the faceoff dot with Ian Groom going 16-for-22 (72%). In addition, Paxtin Powell made an impressive 27 saves on the day to anchor the Pirates’ defense. However, 37 turnovers (21 caused) would spell the demise of the Pirates in this one as they failed to hang onto the ball, and thus were unable to get much offensive momentum going at all.

The Keydets’ defense was led by James Boynewicz (3GB/3CT) and Tim Lindenbaum (4GB/2CT). Damian Levin made eight saves in cage with a 57% save percentage.

Mile Fawcett led the way for the Hampton offense with two goals and one assist for three points.