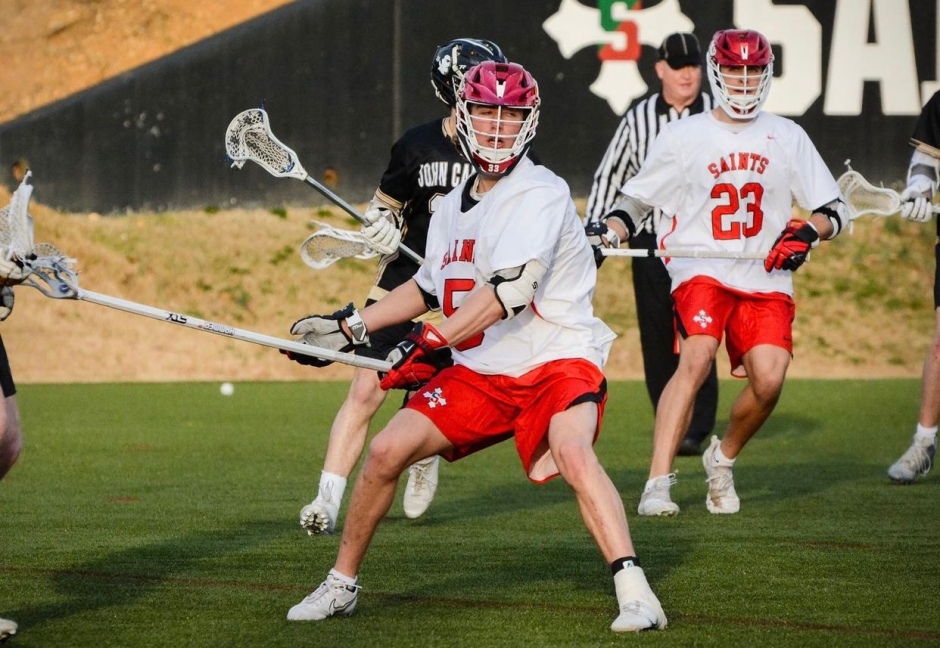 After a week off from the weekly notebook to release my midseason 2024 standouts list, I’m back.

Last week was, as usual, another extremely action-packed week of high school lacrosse across the South. And perhaps nowhere was the action bigger than in the state of Texas. Go figure, right.

Virginia power St. Stephen’s & St. Agnes headed west to the Lone Star State where they took on Dallas Jesuit on Thursday night before playing Highland Park on Saturday and Southlake Carroll on Sunday. The Saints went 3-0 during their trip.

On Thursday, the Saints pulled ahead 3-0 in the first quarter against a rusty Rangers squad playing their first game in a week. Two Will McCulloch (Loyola) goals helped them expand that lead to 5-1 at the half, and heading into the fourth they led 7-2.

However, it what looked like a possible breeze to the finish line was anything but as Will Reading got hot at the faceoff dot in the fourth. That included winning the first two draws of the period, which led to a pair of Mac Hobbs (Penn State) goals within 35 seconds of each other to make it a three-goal, 7-4, game. The Rangers would end up outscoring the Saints 5-2 in the final stanza, but multiple late stops helped secure the 9-7 win.

McCulloch led the way with five points (2G/3A) for the Saints while Witt Crawford (Drexel) had two goals.

Hobbs led the Rangers with four goals while Beckett Foley had two. Connor Knight played the first three quarters in cage and made 10 saves to help keep them in this game. Reading went 15-for-20 (75%) at the dot.

The Saints then went on to beat Highland Park 16-9 and Southlake Carroll.

In the later contest, the Dragons kept things close for the majority of the game and led 7-6 at the half. However, three quick Saints goals to start the third quarter for changed the pace. Once St. Stephen’s & St. Agnes got the lead, they never trailed again. Up 12-8 at the end of the third, the Saints outscored the Dragons 4-3 in the final frame to put it away.

Big Battles in The Sunshine State

In Jacksonville, the Rivalry on The River event took place last weekend with games being played from Thursday through Saturday night. The marquee battle of the event was the 7:30pm Saturday night matchup between Ponte Vedra and Creekside.

Ponte Vedra flexed their muscle and dominated. After leading by one, 4-3, at the end of the first quarter, the Sharks outscored the Knights 12-3 in the final three periods of play to run away with the dominating 16-6 victory.

In addition to that aforementioned contest, St. Thomas Aquinas defeated Saint Andrew’s 8-7. A win over the defending 1A champions moves the Raiders to 8-3 on the season.

Elsewhere, St. Edward’s took down Jupiter 11-7 to move to 10-1 on the season. The Pirates will face Saint Andrew’s this week before facing Lake Mary next week in what are their two biggest test left.

Lions Continue to Roar in The Peach State

Back a few weeks ago, I wrote about Lovett and their strong start after Roswell. Well, the Lions have continued to roll and are sporting a 10-0 record.

Last week, they arguably their biggest win of the season as they took down reigning 5A champion Blessed Trinity 16-9. It marked the Titans second loss of the year and only their second game in which they were held to single digits as Russell Overly (Denver) and that Lions’ defense continue to play well.

Overtime Thriller in The Volunteer State

On Friday night, Ravenwood visited Montgomery Bell for a battle between the reigning TSLA Private and Public DI champions.

And last week, it was the visiting Raptors that came out with the 9-8 overtime victory off a falling down shot from Conor Jensen with less than two minutes left in the overtime period. The win, plus a victory on Saturday, moves Ravenwood to 7-0 on the season.

What to Watch This Week

Here is a look at five of the biggest games around the region this week.