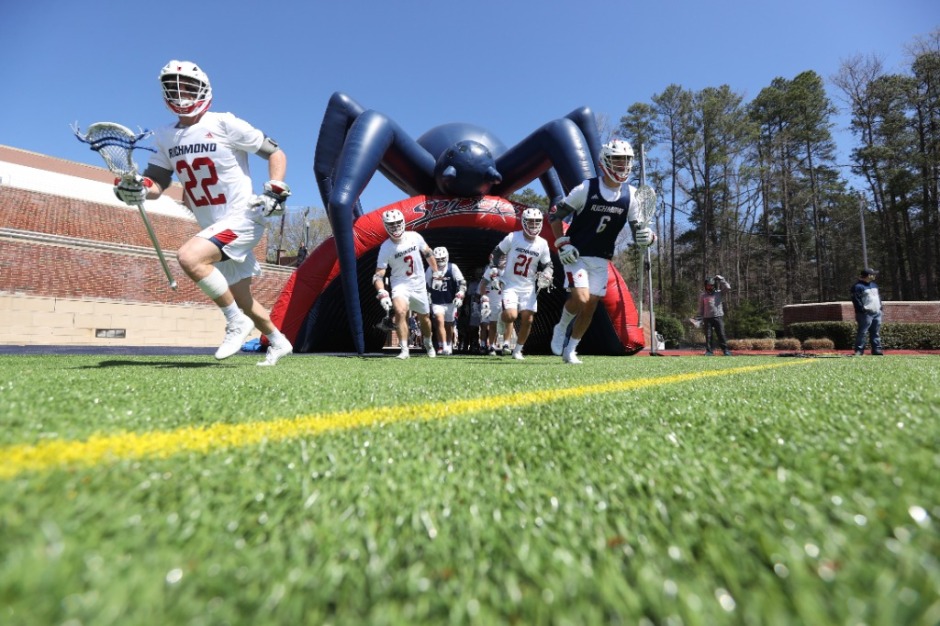 The Richmond Spiders pulled off the biggest upset of the day as they took down the Virginia Cavaliers 17-13. It marks the Spiders’ first win over the Cavaliers in program history.

Zach Vigue’s 17 saves helped carry the Spiders through the finish line. Vigue made seven saves in the fourth quarter alone to help hold the Cavaliers to just one goal in the period, allowing Richmond to build upon their lead and earn the four-goal, upset victory.

Dalton Young (4G/3A) and Ryan Lanchbury (4G/1A) led the way on the offensive end for the Spiders with seven and five points, respectively.

Young got his first two goals in the first quarter of play to help cut the Cavaliers lead to 7-4 at the end of the opening frame. He then netted his third of the day during the Spiders’ game-changing seven-goal run that lasted from early in the second through early in the third and helped put Richmond ahead 12-9.

Lanchbury scored back-to-back goals during that run, netting his first of the day with one second left in the half to give Richmond their first lead of the game, 10-9, before getting the scoring started in the third quarter to help expand that lead.

Despite Virginia going 20-for-33 (60%) at the faceoff dot and 8-for-13 in the second half alone, the Cavaliers were unable to put together a full-fledged comeback effort. Payton Cormier twice cut the Richmond lead to two in the third quarter, as did Xander Dickson, but they were never able to stack goals like they had early in the first half.

Cormier led the way with five goals for the Cavaliers while Griffin Schutz and Matt Moore each had two goals. Petey LaSalla (9-for-10) and Gabel Braun (11-for-23) each saw time at the faceoff dot.

Both Moore and LaSalla left the game early for the Cavaliers with injuries.

In a game that was interrupted by a lighting delay, the Jacksonville Dolphins defeated the High Point Panthers 14-13 in what was a marquee SoCon matchup.

Jacksonville put together a big, second-quarter effort as they outscored the Panthers 6-1 in the period to take the 8-5 leading heading into the intermission. Three of those second-quarter goals came from Ethan LaMond, who led the way for the Dolphins with five goals on the day.

High Point opened the second half on a three-goal run, which included two goals from Michael Ippoltio, to knot things all up at 8. The Panthers would tie it all up once more, 9-9, before Jacksonville was able to ride through the finish line to earn a marquee conference victory.

The Dolphins ended the third quarter on a three-goal run to take a 12-9 lead heading into the fourth. And while High Point cut the lead to one-goal twice, they were never able to tie things up or take the lead, which they never held the entire game.

After pulling within one, 14-13, with 2:16 left, was unable to get another shot off. A tripping penalty on Mayea late in the game effectively sealed the Panthers’ fate.

In addition to LaMond’s five goals, Jermey Winston scored four goals and Luke Millican made eight saves to anchor things on the other end for the Dolphins.

Another Yale-Penn thriller? You bet.

With just under three minutes left in the overtime period, freshman Chris Lyons found himself isolated up top on a short stick and he took full advantage, rolling back to get his hands free and send the game-winning score past Patrick Burkinshaw to seal the 12-11 victory for the Bulldogs.

The win not only marks the fourth one-goal game between these two since 2019, but also the second top-five victory for Andy Shay’s squad in as many week. The Bulldogs also knocked off Princeton last Saturday.

In part thanks to a three-goal run early in the third, Yale was able to come into the fourth quarter with an 11-9 advantage. However, they would not be able to build upon that lead as the Quakers defense blanked the Bulldogs offense in the fourth quarter as they were only able to put three of their eight shots on cage. All three of which were saves by Burkinshaw, who ended the game with 14 saves.

Sam Handley pulled the Quakers within one with 9:20 left in regulation and Cam Rubin scored the overtime-forcing goal off a Dylan Gergar feed with 4:07 remaining. Gabe Furey got a good look on cage with 2:44 left to potentially give the Quakers the lead, which they never held past the 10:50 mark in the second quarter.

Lyons’ game-winner was his third of the day as he ended with a hat trick and one assists for a team-high four points. His other two goals came in the first half as he scored the first goal of the contest for Yale and put away the final tally of the first half with just one second on the clock to give the Bulldogs the 7-6 halftime lead. Leo Johnson (2G/1A) and Matt Brandau (1G/2A) each had three points on the day.

Nicholas Ramsey went 14-for-25 at the faceoff dot and Jared Paquette made 12 saves.

A Billy Coyle score with 3:08 left in the contest sealed the deal for the seventh-ranked Cornell Big Red as they narrowly took down the Dartmouth Big Greeen, 8-7, on Saturday afternoon.

Cornell went on a 6-1 run from late in the first through early in the fourth to pull themselved ahead 7-5 with 11:19 remaining. Dartmouth, who had sprinted ahead 4-1 earlier in the game, ended the 15-plus minute scoring drought with a Tommy Rogan score. Pater Lapina followed with one of his own to knot things up at 7 with 6:23 left.

Dartmouth was only able to get two shots off in those final six minutes of the game and both were stopped by Chayse Ierlan to give himself eight saves on the day and help secure the win for the Big Red.

Coyle led Cornell with three points off two goals and one assist. John Piatelli put up the same stat line.

Rogan led Dartmouth with four points off three goals and one assist. George Prince has one goal and two assists for three points while Mitchell Myers went 10-for-16 at the faceoff dot and Daniel Hincks made 16 saves.

The biggest game of the opening weekend in the Big East pitted the Georgetown Hoyas and Denver Pioneers against each other in a game between two programs that have been the best in the league over the past few seasons.

A pair of JJ Sillstrop goals helped to give the Pioneers a 4-2 lead late in the first quarter, but that would be the last lead they would see all day. Georgetown went on to score five unanswered through the 2:28 mark of the second to help give them the 7-5 halftime lead. The Hoyas would then put together a six-goal run in the third quarter, which saw three goals from Graham Bundy, Jr., to pull ahead even more, 13-5, and effectively put this one to bed.

The two teams went 4-4 in the final 19-plus minutes of play, but there was no coming back for the Pioneers as the Hoyas leave the Mile High City with a dominating 17-9 victory to open Big East play.

Dylan Watson had seven goals to lead the way for the Hoyas while Alex Trippi (2G/3A) and TJ Haley (5A) each ended with five points. James Reilly went 17-for-28 at the dot. With Owen McElroy still out, freshman Michael Scharfenberger got his second start and made 13 saves.

Jack Thompson made 17 saves for Denver while Sillstrop had a hat trick to lead the way on offense.

In a high-stakes CAA opener, the UMass Minutemen took down the Delaware Blue Hens 11-10 in overtime.

Down 9-4 at the half, the Minutemen buckled down and stormed all the way back to earn a massive victory in their conference opener. The Minutemen went on a 6-0 run from the middle of the third through early in the fourth to take the 10-9 lead. Mark Bieda forced overtime for Delaware with 8:47 left in regulation and Tim Hoynes called game for UMass.

Logan Liljeberg (1G/2A) and Kevin Tobin (3G) led the way for the UMass offense. Caleb Hammett went 20-for-24 at the faceoff dot and Matt Knote made 20 saves (11 in second half).

Bieda led Delaware with four points off one goal and three assists. Ty Kurtz, Mike Robinson, and Cam Acchione each had two goals.

Behind a program-best eight-goal performance from Jake Taylor, the Notre Dame Fighting Irish ran Syracuse out of South Bend, 22-6.

The Irish got up 9-0 in the first quarter and never looked back as they took a 15-3 lead into the half and built upon that with a 7-3 second half showing.

On top of Taylor’s breakout performance, Pat Kavanagh put up nine points off three goals and six assists. Liam Entemann made 13 saves in the time in which he played.

It was a one-sided Tobbaco Road Showdown on Saturday afternoon as the Duke Blue Devils trounced the North Carolina Tar Heels 15-6.

Chris Gray led Carolina with four points off one goal and three assists.