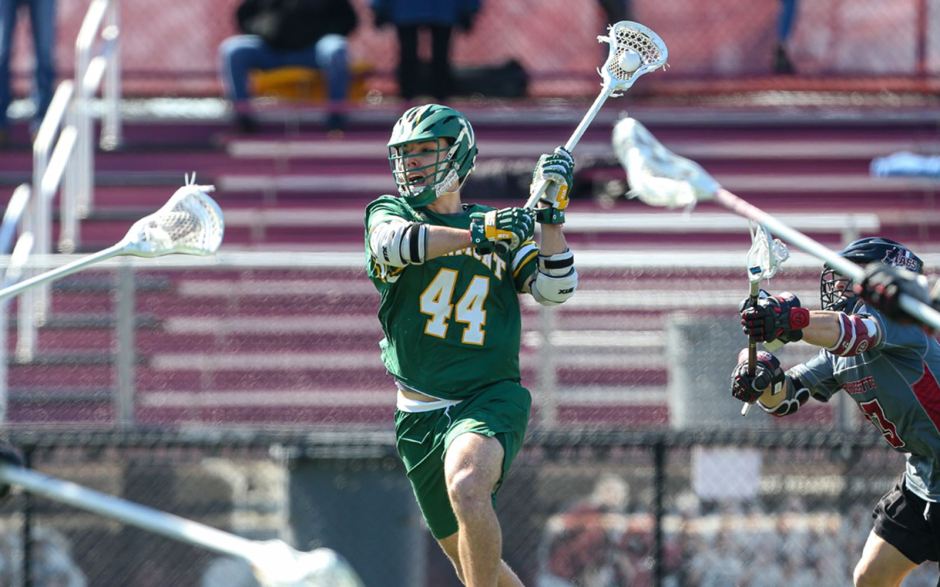 The 2022 America East Men’s Lacrosse Tournament will get underway on Thursday, May 5th with the semifinals. The championship game will be played on Saturday.

As the top seed, Vermont will play host.

Playing a tough non-conference schedule that was highlighted by early-season contests at Duke and Brown, the Catamounts started slower than many expected with a 2-6 record heading into league play. But ever since entering their America East schedule, the Catamounts have cruised with a 6-0 mark in league play and an average margin of victory of 9.6 goals against conference opponents.

One of a group of an uber-talented starting six on offense, McConvey draws much attention as the Catamounts’ top goal-scorer. He leads not only his team, but also the conference as a whole with 43 points on the year. McConvey has also 11 assists for 54 points on the year and is second on the team in points, behind only David Closterman with 55.

In many respects, Vermont goes as Tommy Burke goes. The Catamounts are ranked third nationally in time of possession, and much of that is thanks to Burke’s success at the dot as he has gone 220-for-347 (63%) thus far in 2022. He is the best in the conference and fifth nationally in winning percentage.

The 5-foot-11, 155-pound graduate student from Darien, Conn. very much reflects the mascot of the Catamounts. He has cat-like reflexes, is as active in and out of the cage as any in goalie college lacrosse, and at times unpredictable. Anchoring this Catamounts’ defense, Cornell has made 151 saves with a 55% save percentage this season.

A big year for Kevin McKeown and the Binghamton Bearcats, they have taken down both UAlbany and UMBC in the same season for the first time since 2004 to help them earn the second seed in the conference tournament. Can they continue to push forward and get their first postseason since 2017, which was McKeown’s first season at the helm of his alma mater.

Winkoff was a headliner for this offense coming into the season and that has remained throughout the season as he leads the Bearcats with 52 points off 32 goals and 17 assists. Winkoff is the face of this offense and draws the most attention from defenses as he can and will put the ball in back of the cage.

Matthew DeSouza came into the season as one of the best players at the dot in the American East and has loved up to that reputation, going 98-for-176 (55%) through 11 games. With DeSouza missing each of the past two games, sophomore Ross Chazanow has stepped in as the starter and gone just 25% (12-for-47). He’s had good performances earlier in the season splitting reps with DeSouza, and that will likely need to come out if Binghamton wants to have success in the postseason.

Another notable name on this Binghamton squad, Dolan has continued to find success this season. Anchoring the Bearcats’ defense, e has made 180 saves with a 54% save percentage through the regular season. When he turns it on, the rest of the defense, and team, usually does as well.

The Retrievers started the season with an upset win over Drexel and also beat Utah out of conference. Outside of a 12-3 blowout loss to Vermont, the Retrievers have either beaten the teams they should or been competitive in close losses (Binghamton, Stony Brook). Is UMBC the sleeper in the America East this season?

Anchoring the second-best scoring defense in the America East, Lingner has made 118 saves with a 51% save percentage while only letting in an average of 10.18 per game. Lingner has been a crucial aspect of this UMBC defense and will need to continue to do so if they want to keep their season alive.

The sophomore has asserted himself as the Retrivers’ top option at the faceoff dot and has been crucial in their success this season, going 129-for-249 (51%) through 11 games. That included an 18-for-24 mark in their regular season matchup against Binghamton and a 9-for-17 mark against Vermont.

Not just one player, but an entire unit to watch. Over the past month, the Retrievers have seen an offensive resurgence as they went 3-1 and outscored their opponents 46-23 in those three wins, which included a 16-7 defeat of UAlbany. Their starting midfield line alone has accounted for 11 (23%) of those goals. They also had an eight-point (seven goals) outing against Stony Brook.

Leading the Danes with 35 points off 23 goals and 12 assists this season, Hogg is the face of this UAlbany offense that has been able to get hot and stay hot at times this season.

After coming onto the scene strong last season during his first year with the Danes, Gash has continued to impress as a key member on the back end for this squad. He has caused eight turnovers, scooped up 21 ground balls, and also scored twice and assisted on two more as a threat in transition at times.