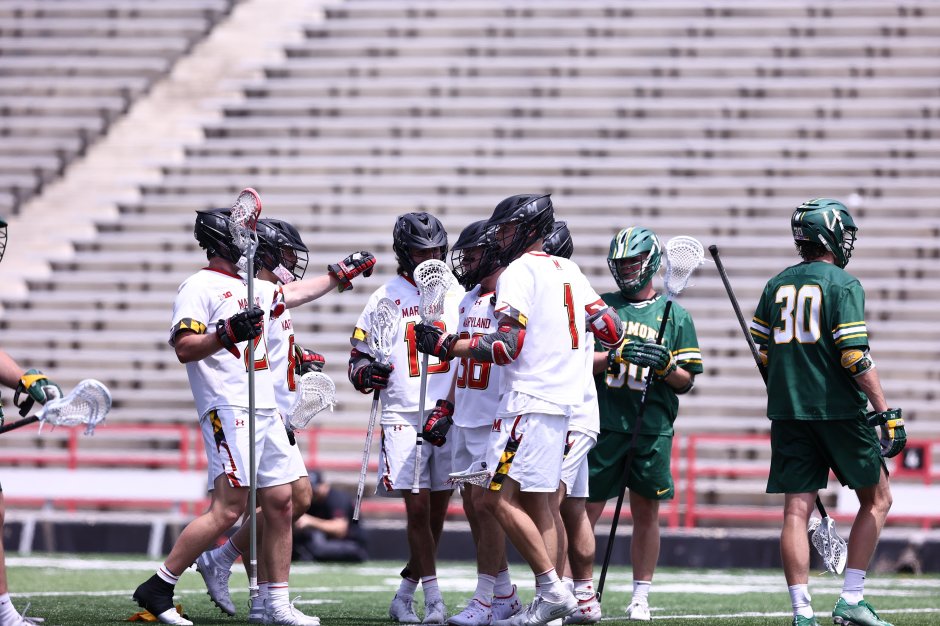 Anthony DeMaio moved the ball up to Jonathan Donville right in front of the “B1G” logo. Donville took a few steps, threw a little split dodge to run past the Vermont short-stick defenseman, and stung one past Ryan Cornell.

The score wasn’t just the opening score of the second quarter to help put Maryland up 4-1, but it served as the spark the Terrapins needed to get rolling at full speed after a nearly 10 minute drought to end the first quarter. During those final minutes of the opening frame, the Catamounts defense held the Terrapins to three shots, two of which were saves by Cornell, and caused three of four Maryland turnovers during that time.

Vermont’s effort late in that first quarter kept them within two, 3-1, of the No. 1 teams in college lacrosse heading into the second quarter. However, any hope that the Catamounts could get any close quickly died.

Donville’s quarter-opening score was followed up just seconds later by a Jack Koras goal, cashing in on a feed from behind from Keegan Khan. Owen Murphy then found Anthony DeMaio for a rocket of an outside shot with 11:26 remaining in the second, making it three goals in three minutes to open the second quarter for Maryland.

By the time the half hit, Maryland had outscored the Catamounts 9-1 in that frame alone. That run included a pole goal from Ajax Zapppitello and a score right off the faceoff as Luke Wierman took a win straight down and found Keegan Khan for the score.

Those two scores coming less than a minute apart showcased the kind of day the Terrapins were also having at the faceoff dot and on the back end.

After getting off to a perfect, 5-0 start in the first quarter, Wierman only continued his dominance at the dot as he ended the day with a 16-for-19 (84%) mark.

The Terrapins only added onto that 12-2 lead in the second half, outscoring Vermont 9-3 in those final two frames to secure the dominant 21-5 victory. It marks the largest margin of victory for Maryland in the NCAA Tournament.

Logan Wisnauskas led the way for the Terrapins offense with six points off four goals and two assists. Anthony DeMaio and Owen Murphy each netted a hat trick. Keegan Khan scored twice and dished out three assists for five points. In total, Maryland has 12 different goal-scorers.

Maryland will move to face Virginia in the NCAA Quarterfinals in Hempstead next week.