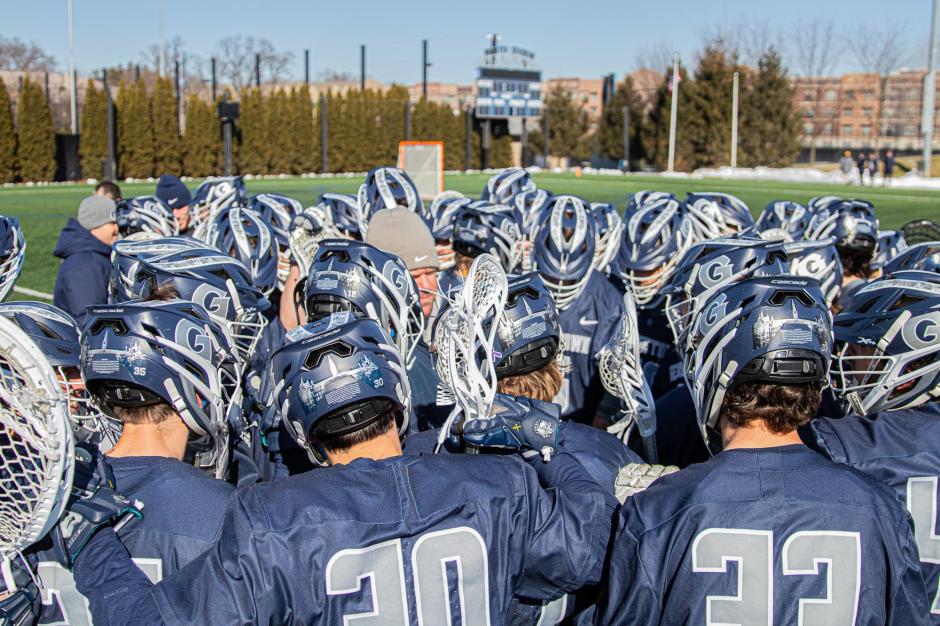 The Georgetown Hoyas’ 2022 season came to a close on Sunday night as the Delaware Blue Hens upset second-seeded Hoyas on their home turf in the most shocking result from the first round of the NCAA Tournament.

While the sun may have set on what was believed to be a very promising 2022 campaign for the Hoyas, the future of Kevin Warne’s program remains strong for 2023 and beyond. And that is even more true after the moves made early this offseason.

Prior to the Hoyas’ season coming to an end, they grabbed grad transfers in Brian Minicus from Colgate and Daniel Hincks from Dartmouth. Minicus, a first-team All-Patriot League selection, led the Raiders with 36 goals and 23 assists for 59 points. Listed at 5-foot-10, 175 lbs., Minicus is a versatile playmaker who could very well slide into and make an impact on that Hoyas’ offense.

The 6-foot-5, 210-pound Hincks proved to be a great green wall for Dartmouth lacrosse over the past four years. He made 168 saves with a 52% save percentage while helping lead the Big Green to their best season during his time with the program (4-6, 0-6 Ivy League). With the exit of Owen McElroy after five seasons with the Hoyas, there will likely be a goalie battle between Hincks and current freshman Michael Scharfenberger, who has started three games this season (45 saves, 59% save percentage).

Adding to those two additions, the Hoyas have landed North Carolina grad transfer attackman Jacob Kelly and Syracuse A/M Tucker Dordevic. Ty Xanders was the first to report both moves.

Kelly served as a captain for the Tar Heels this past spring and a three-year starter in Chapel Hill. He tallied 35 points off 20 goals and 15 assists in 2022. Dordevic, a three-time All-American, has been one of the focal points of the Syracuse offense during his time with the Orange and was one of the most high-profile players on the transfer market. He is coming off a season in which he was moved from midfield to attack and netted 47 goals and dished out 12 assists as the team’s points leader (59).

Georgetown’s offense averaged 15 goals per game a year ago and was one of the most productive in college lacrosse. The addition of Dordevic, Kelly, and Minicus just adds more talent to the pool already on campus in the nation’s capital. With the loss of Alex Trippi and Connor Morin, who spent one season with the Hoyas as grad transfers this past spring, at the midfield and attack spots, the trio of transfers on the offensive end immediately fill those needs.

Kevin Warne and his staff likely won’t just be counting on grad transfers as being the only high-level new guys on campus next season. Georgetown brings in a stacked recruiting class, headlined by Calvert Hall (Md.) midfielder Jordan Wray and Brunswick (Conn.) attackman Henry Caponiti. Both are rated as five-star players by Inside Lacrosse.

In addition to the influx of talent, the Hoyas will also be returning quite a bit as well. Faceoff man James Reilly announced via Instagram on Thursday that he would be returning for a fifth-season in 2023 and on Thursday night, Hoyas’ midfielder Declan McDermott confirmed to Lacrosse Bucket that he would also be back for a grad year.

Reilly, a two-time All-Big East selection, went 233-for 387 (60%) this past season. He holds program records for career FO wins (693) and GBs (397). McDermott is a four-year starter and was the Hoyas’ sixth-leading point-getter with 29 goals and eight assists (37 points) this past spring. Along with fellow midfielder Graham Bundy, Jr. (45G/25A), who was the team’s leading scorer last season, and attackman TJ Haley (11G/30A), McDermott is one of three of the Hoyas’ top six on offense who are confirmed as returning next season. And Reilly will, once again, give that unit plenty of extra possessions.

As previously stated, Will Bowen, who arrived as a transfer from North Carolina last fall, will be back as a leader on that heralded Georgetown defense. James Donaldson is the only other returning starter at close and will be a senior next year. Wallace Halpert and Will Tominovich are the next two top returning poles after combining for 25 caused turnovers a season ago at LSM. Will Godine and Jack Leary both return at the SSDM midfield spot. Dylan Hess will also be back as a junior. He is a serious threat on both ends as a two-way player.

Goalie and that third spot at close are likely the only two real position battles to be had within this defensive unit that was the best in college lacrosse a season ago, allowing an average of 8.18 goals per game.

All in all, the immediate future of Georgetown lacrosse is already being shored up and the foundation is set for the Hoyas to be unleashed in 2023. And if the current trajectory continues both on the field and on the recruiting trail, the promise of a successful long-term future for Georgetown lacrosse will likely remain.