The Bryant Bulldogs joined the NEC in 2010 and have only missed one conference tournament once (2019). In addition, they have won five NEC titles (2012, 2013, 2014, 2015, 2017) and made four NCAA Tournament appearances as a DI program, which includes their historic upset over Syracuse in the first round of the 2014 tournament.

END_OF_DOCUMENT_TOKEN_TO_BE_REPLACED

The 2021 season was a season in which grad transfers and fifth-year players seemed to dominate the landscape. However, as usual, there were teams that relied heavily on freshmen for production on both ends of the field.

END_OF_DOCUMENT_TOKEN_TO_BE_REPLACED

The 2021 season was a season in which grad transfers and fifth-year players seemed to dominate the landscape. However, as usual, there were freshmen at every position that broke through and shined during their first season of college lacrosse.

END_OF_DOCUMENT_TOKEN_TO_BE_REPLACED

The 2021 NCAA DI Men’s lacrosse bracket was released on Sunday, setting in stone the 16 teams that will be fighting to be the last one standing on Memorial Day. And as always, in the days following the bracket being released there is a lot chatter and debate around not only which teams will make a run to Championship Weekend, but also which teams are most likely to pull off an upset win and thus create the most chaos.

END_OF_DOCUMENT_TOKEN_TO_BE_REPLACED 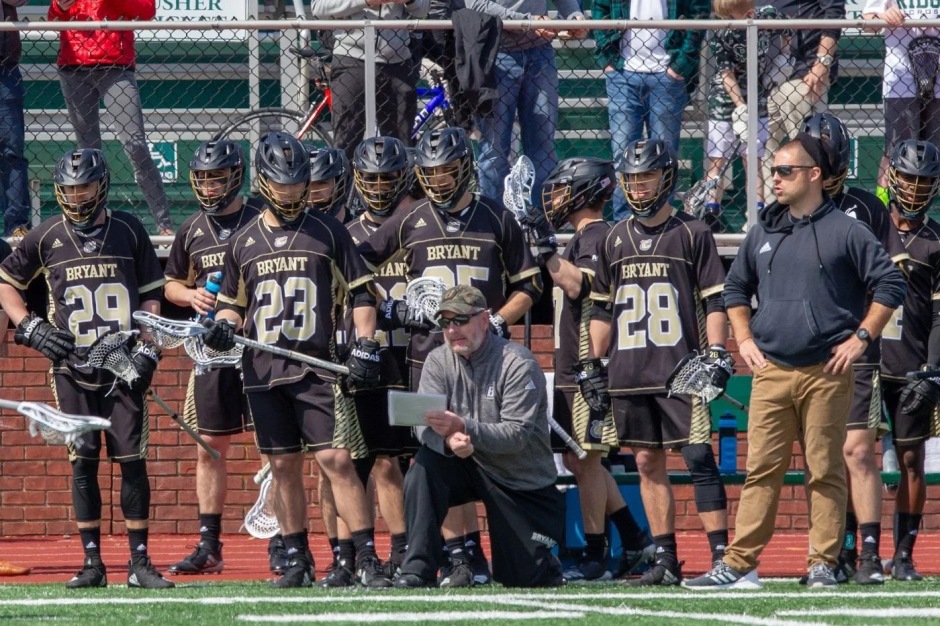 Mike Pressler and the Bryant Bulldogs landed a commitment in the class of 2022 on Thursday, as St. Margaret’s Episcopal, Calif., midfielder Matt Groeninger verbaled to the Bulldogs, following in the footsteps of his older brother, Kevin, who is a sophomore midfielder for the Bulldogs.

END_OF_DOCUMENT_TOKEN_TO_BE_REPLACED

Since 2007, Mike Pressler has been at the helm of Bryant lacrosse and the Bulldogs have seen, majority, nothing but success. Even in their transition to DI from DII in 2009, the Bulldogs continued their winning ways. END_OF_DOCUMENT_TOKEN_TO_BE_REPLACED

In a Sunday afternoon contest the Bucknell Bison got a win over the Bryant Bulldogs in their home opener.

Junior attackman Will Yorke led the Bison with 5 goals in the win. Reed Malas and Matthew Barkauskas carried the rest of the load on offense with 2 goals each. The lack of depth in scoring didn’t seem to matter too much as there were plenty of assist as well. Christian Klipstein was able to make 13 saves as he anchored the Bison defense in goal.

Bryant was led by Marc O’Rourke as he tallied 3 goals to lead the Bulldogs offense. Mason Balch had 2 goals and Zach Coffey tallied just 1 goal to also help the Bryant offense. In goal Luke Caracciolo made 16 saves to help that defense.

Just 65 seconds into the game Matthew Barkauskas stung a transition goal to put Bucknell up 1-0 early. The rest of the first quarter was filled with defensive stands, turnovers, and shot clock violations. However, after a push call on Bucknell with just 2:53 in the first Bryant would get on the board with a man-up goal coming from Mason Balch. That goal tied it up at 1-1 heading into the second.

The second quarter saw much more action, offensively speaking. Bucknell got the quarter started off with two early goals coming from Matthew Barkauskas and Reed Malas. Bryant started to find themselves offensively as they went on a two goal run within a minute late in the second. Mason Balch and Marc O’Rourke scored during that run for Bryant.

Coming out of halftime with it tied 3-3 Bucknell was searching for more as the Bison, and Will Yorke in particular caught fire in the third.

After a slow start to the third Will Yorke went on a three goal run all by himself late in the third to give Bucknell a 6-3 lead heading into the fourth. This run was a huge boost for Bucknell and really helped propel them to victory.

And it’s a natty for Will Yorke! Three straight goals here in the third period and the Bison are on top 6-3! pic.twitter.com/09GkecBWrw

Early in the fourth Bucknell extended their lead with another goal from Will Yorke, his fourth in a row. Bryant was able to answer just a few minutes later with a goal from Mac O’Rourke to stop the bleeding.

Bryant scored twice more as did Bucknell to end the game. The Bison just had too much momentum on their side for Bryant to force any kind of comeback. Bucknell also dominated possession which helped them out a ton in this win.

Both teams will be in action on Saturday February 16th as Bucknell takes Richmond in a home contest and Bryant has their home opener against Providence in an Ocean State Cup game.

The Bucknell Bison will welcome the Bryant Bulldogs on Sunday afternoon as these two teams know each other very well, and they both look to get a win in what should be a pretty good Sunday afternoon matchup.

Senior midfielders Reed Malas and Ryan Durkin look to get back out and lead this Bison offense against Bryant on Sunday. The two senior midfielders each had 2 points against Maryland, Malas tallied 2 goals while Durkin had 1 goal and 1 assist. Their offense looks to keep improving after losing the majority of their point scoring from a year ago.

On the defensive side of the ball Alston Tarry, Tommy Spoko, and others look to step up and be much improved from what they were a week ago. This defense needs to be able to hold Bryant and not let them get off to a hot start if they want to have any chance at winning this game. In goal senior goalie Christian Klipstein looks to build off of a pretty good performance to open the season with 10 saves.

Bryant is coming into their first game of the 2019 season as they look to get things started off on a high note. The Bulldogs are a little bit of a younger squad, but head coach Mike Pressler always has the boys ready to play.

The Bulldogs return a strong goalie in senior Kevin Beimfohr who stopped 101 shots last season with a 48% save percentage. He looks to anchor this defense and get things started off on a high not in this season opening contest. Out in front of Beinfohr the Bulldogs have a younger core with juniors Zach Coffey and Jake Fiske looking to lead the way.

With the matchups this game presents and the talent on both sides of the ball this one could very much be a defensive battle or an offensive shootout. But judging by these two squads past contest it looks like this will be a good one either way. Bryant has won the past four contest by no more than two goals.