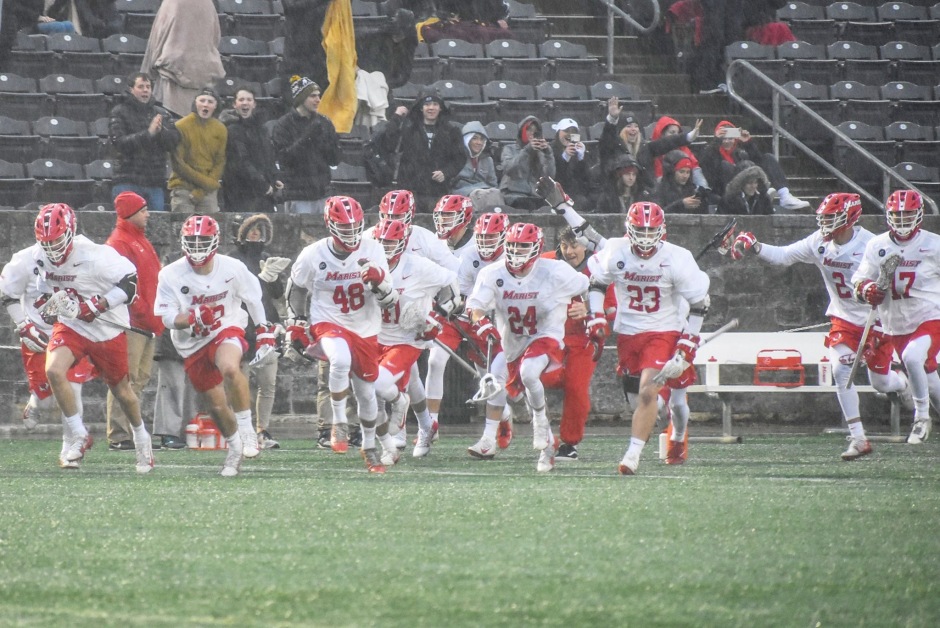 As the saying goes, Tuesday is for the hunter.

That statement rang true today as three top-20 teams (Army, Delaware, Maryland) all went down. Additionally, we saw what one can only define as one of the best performances so far this season from Michael Sowers. The man went off!

The Army Black Knights came into Tuesday’s road contest against Marist riding high after starting the season 3-0 and looking like the hottest team in the country following a dominating victory over Rutgers on Saturday. But in Poughkeepsie, N.Y. they ran into the absolute buzzsaw that is the Marist Red Foxes. Keegan Wilkinson’s squad came out the gate firing. And while Miles Silva got Army on the board first, it wasn’t long before Marist fully got into the groove and took a 5-3 lead at the end of the first.

From late in the first through early in the third, Marist scored eight unanswered goals. Once the Red Foxes seized control there was no looking back. Both teams traded goals through most of the second half. The Red Foxes were able to walk away with the 17-9 victory, their first win over a ranked opponent in three years. The 9th-ranked Black Knights are also the highest ranked team Marist has beaten in program history.

Jamison Embury led the Red Foxes with seven points (3G/4A). Jake Weinman had a hat trick and Joe Tierney tallied three points (2G/1A) for Marist, as well. The Red Foxes also benefitted from some stellar play at the specialist positions. Peyton Smith went 17-for-28 at the faceoff dot and Jake MacGregor made 16 saves in goal.

Miles Silva led Army with five goals while Brendan Nichtern dished out four assists. Nichtern, a sophomore, also surpassed the 100 career points mark in the loss, making him the youngest player to reach the benchmark in program history.

Villanova took a tough loss at home against Yale on Saturday. But they bounced back very strong, taking down the 4th-ranked Maryland Terrapins at home on Tuesday night. The Terrapins have been living on the edge of defeat, narrowly beating Richmond and Penn over the past two weeks. But this time they couldn’t complete the comeback like they had done the previous two games.

After a pretty back-and-forth first half, the Wildcats held just a 7-6 lead heading into the third. But they soon started to run away with it, outscoring Maryland 6-2 over a period of 21:62 minutes. Just as they had in their previous two contest, Maryland went on a late run, scoring four straight in the final eight minutes of the game. But that wouldn’t be enough, at least this time, as Villanova was able to hold them off and secure the win.

Connor Kirst (3G/2A) and Keegan Khan (2G/3A) led the Wildcats with five points each. Patrick Daly also tallied four points (3G/1A) in the victory. Will Vitton made 14 saves in cage for Villanova.

Maryland was led by a five point (4G/1A) effort from Logan Wisnauskas. Jared Bernhardt (3G/1A) and Anthony DeMaio (1G/3A) each had four points, as well. The Terps won the battle at the faceoff dot as Conor Calderone went 17-for-29 on the night.

The Blue Hens entered the Top-20 on Monday, but it could be a short-lived for them in the rankings, especially after tonight’s loss at Saint Joseph’s.

Behind an 18-save performance from Mike Adler, the Hawks were able to subdue the Delaware offense and only let them rip off one multi-goal run the whole game. That four-goal Delaware run in the second quarter saw the Blue Hens score their first four goals of the game. Saint Joseph’s turned on the jets in the fourth quarter, going on a five goals run to seal the deal. Shane Fable, who ended the night with a hat trick, had two goals during that final Hawks run.

Fable’s hat trick led all scorers for Saint Josephs. Matt Bohmer and Liam Hare each scored two goals in the win, as well. Mike Alder made a season-high 18 saves in goal.

After a tightly contested first half, Princeton seemed to breeze past Colgate in the second half, riding the hot hand of Michael Sowers in the 20-11 victory.

Sowers already had six points at the half, but the star-studded attackman shot of a cannon in the second half as he just kept adding to his point total. Sowers ended the game with 14 points (3G/11A), breaking an Ivy League record for most points in a game. And he made more than a few highlight worthy plays while racking up all those points, as well.