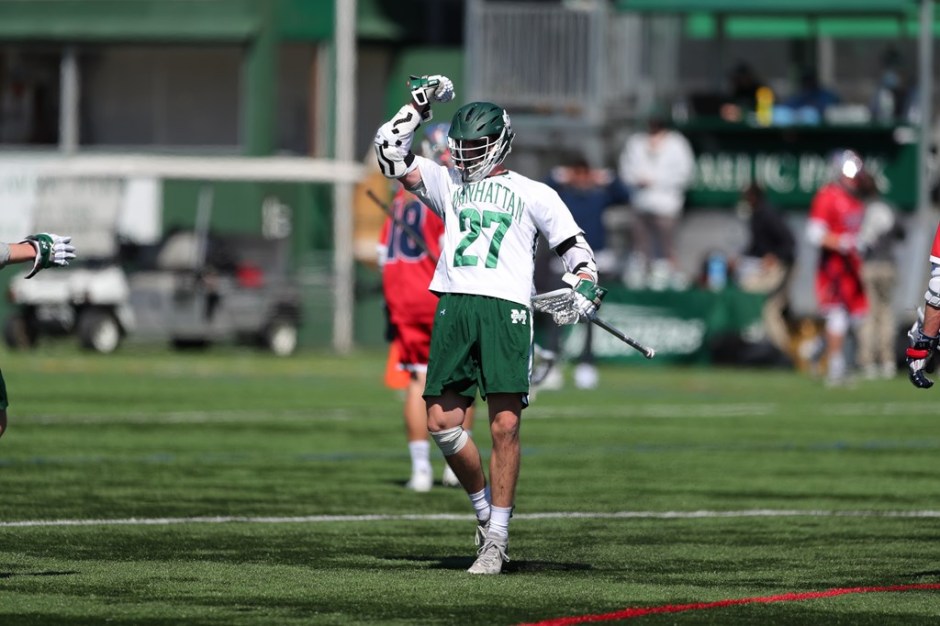 In a rematch of their season opener, in which they lost 8-5 and didn’t count as a conference game, the Manhattan Jaspers took down the Monmouth Hawks 9-8 in double overtime to move to the top of the MAAC standings with a 3-0 conference record. The Jaspers’ win also snaps a six-game losing streak against the Hawks and hands them their first loss of the season.

Manhattan was forced to rely heavily on their defense, which was anchored by an 11-save performance from Brendan Krebs, as Monmouth dominated the faceoff dot with Matt Soutar going 17-for-21 (81%) at the dot and winning 12 of the 11 draws in the second half alone.

Liam Walshe led the Jasper offense with four goals while Luke Hanson had four assists. Three of Walshe’s goals came consecutively in the first half and helped them take a 4-1 lead at the end of the first frame and a 4-2 lead at the half.

In part due to Soutar’s play at the faceoff dot, Monmouth went on a three-goal run of their own from late in the second through the 10:17 mark in the third to tie things up at 4. From that point on, neither team scored consecutive goals for the remainder of the contest.

A power play opportunity within the final minute of regulation gave Manhattan and chance to put the game away, but a caused turnover by Dillon Smart allowed the Hawks to regain possession and Scooter Whiteside forced overtime with just 11-seconds remaining on the clock. After a scoreless first overtime period, it looked like we could’ve been heading for triple overtime when the clock started ticking below 30 seconds in the second overtime period, but Jake Nicolosi was able to put in the game-winner for the Jaspers off a successful clear attempt with just 18 ticks left.

Dalton Young (6G/2A) and Ryan Lanchbury (3G/4A) combined for 15 points and connected on two goals to helped lead the Richmond Spiders past the High Point Panthers, 17-10. The win moves Richmond to 3-0 in the SoCon and further solidifies them as the consensus best team in the conference.

Outside of Young and Lanchbury, the Spiders Andrew Hamilton went 18-for-31 (58%) at the faceoff dot and Jack Rusbuldt made 13 saves with a 57% save percentage.

Richmond’s dominance at nearly every spot on the field helped them get out to an impressive 10-4 halftime lead. A five-goal Spiders run from late in the second through early in the second aided that offensive and allowed them to take such a commanding lead at the half.

Like usual, High Point didn’t give up or give in, despite being down seven goals. The Panthers, who were led by Asher Nolting with two goals and an assist and saw Parker Green make 17 saves with a 50% save percentage, outscored Richmond 4-2 in the third quarter and ended the frame on a three-goal run. But while they were able to get within four heading into the final quarter of play, Richmond didn’t leave much room and pulled out the win.

Behind a five-goal, six-point outing for Ryan Tierney, the Hofstra Pride took down the Fairfield Stags to open conference play. The contest was the first for the Pride in over three weeks due to a two-week program pause.

Additionally, Bobby Casey made 11 saves to anchor the Pride defense in his first game of the 2021 season and Brian Herber went 18-for-24 (75%) at the faceoff dot.

Taylor Strough led Fairfield with three goals and an assist while Colin Consoli made 18 saves.

Following a first quarter that saw Hofstra take a narrow 2-1 lead, the Pride turned up the heat and outscored the Stags 12-3 in the second and third quarters combined. That run in the middle of the contest put the Pride on top 13-5 heading into the final quarter and allowed them to coast to victory.