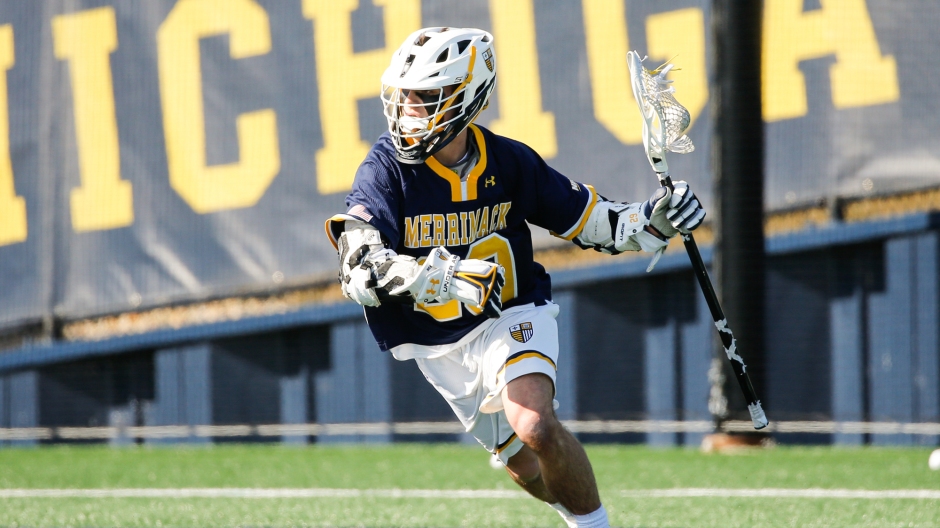 After two consecutive DII national titles, the Merrimack Warriors made the jump to the DI ranks in 2020. And their success didn’t translate over as quickly or as smoothly as some may have thought or hoped it would, as the Warriors went 1-5 during the shortened 2020 season. Their lone win came in a 14-12 victory over Michigan. And while they did drop five out of their six contests, the Warriors were highly competitive in those losses, losing by an average of 1.8 goals.

Coming into the second year of the DI era at Merrimack, the Warriors are still three years away from being able to compete in the postseason due to the NCAA rules. Despite any May Madness aspirations having to be put on hold for the next few seasons, the Warriors will certainly be looking to take a step forward and mark up plenty more wins in their second year in DI and the NEC.

Over the past few seasons it has been the offense of this Merrimack squad that has garnered much discussion, in large part due to the two-time DII National Player of The Year Charlie Bertrand running things at attack. With arguably the greatest player in program history graduated and taking his talents to Charlottesville, Va., to play his fifth-season for Lars Tiffany and the Virginia Cavaliers, the Warriors’ offense suddenly has a pretty big hole to fill – one that can’t every fully be filled. However, the cupboard is far from bare in North Andover, Mass.

Merrimack, which does lose 23 points due to Bertrand’s graduation, does return a heap of heavy contributors on the offensive end from last season, including three of their top five scorers. Senior attackmen Christian Thomas (11G/11A) and Sean Black (8G/12A) will be their top two offensive returners. The duo were the Warriors’ first and second-leading points getter last season and will be looked upon to take this offense by the horns and run with it.

Outside of those two at the attack spot, midfielder Drew Hailey (4G/4A) was the team’s fifth-leading scorer last season and looks to lead a pretty youthful midfield unit, in which junior Jake Holava (2G/2A) is the only other returning member with any starting experience, starting in two games last season as a sophomore.

In addition to the good amount of impact and role players returning from last season, Merrimack has also picked up multiple transfers on the offensive end. DII Bentley grad transfer midfielder Matt Brooks (3G/7A) will be spending his fifth season of college lacrosse at Merrimack after a solid career at Bentley, where he was one of the top midfielders in the NE10. Brothers Jack and Tommy Rooney have also transferred to Merrimack over the summer and will be looking to make an impact. Jack, a midfielder, comes in from Furman, which nixed their men’s lacrosse program, and Tommy, an attackman, comes in from Siena.

Defensively, things are pretty similar. The Warriors will return three full-time starters on the back end, including starting goalie Peter Brown. The senior has served as the Warriors’ starting goalie since the third game of his freshman campaign. He posted a 49% save percentage last season.

Only losing one heavy contributor at close defense, junior Nicholas Perez-Blanco (9GB/6CT), senior Carlin Joyal (12GB/8CT) should be their top two options at close once again. The two have both the size, talent, experience, and have shown that they can get the job done. In addition, sophomore Sam Walsh will likely be in the mix for a starting spot after a pretty solid freshman campaign, where scooped up three ground balls and caused four turnovers. The Chicago native started the final three games of the season, which saw the Warriors’ defense hold two of their opponents to single-digits.

This defense improved each and every week last season and by the time the season was cancelled seemed to be putting all the pieces of the puzzle together. With as much continuity as this defensive unit will have this season, it only seems as if the Warriors’ defense will continue to take steps forward each performance. And the same can be said on the offensive end, where they also return a sizable amount of continuity despite some pretty significant losses.

Merrimack has also added a few transfers on the defensive end, as goalie Andrew Jenet comes over from Furman and defenseman Lantz Kilburn will come in as a grad transfer from DIII Hamilton.

At the faceoff dot, the Warriors will return their primary faceoffman in Allyn French. As a freshman he went 53-for-97 (55%) at the dot. They do have a question mark as to who will be the secondary guy with Davis Cronin transferring out over the summer.

One thought on “What Can We Expect From Merrimack in Their Second Year as a DI?”