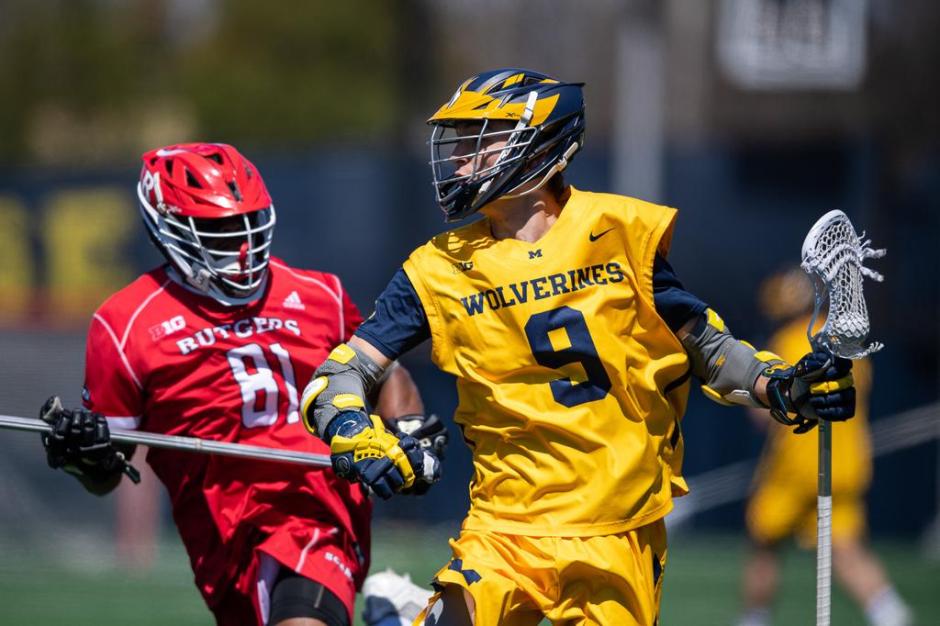 The Michigan Wolverine had both one of the best starts and one of the worst endings to the 2022 college lacrosse season. Michigan won its first seven games of the year by an average of 10.7 goals per game. That included an 18-8 victory over eventual NCAA Quarterfinalist Delaware, which served as the high water mark for the Wolverines’ season.

After its 7-0 start, Michigan ended the season on an eight-game losing streak that included an overtime loss to Penn State, a one-goal defeat to Rutgers, and two-goal loss to arch rival Ohio State to end the regular season. The Wolverines’ season ended in the Big Ten Quarterfinals with a 16-10 loss to Ohio State.

In 2023, Michigan will return nearly all of its top-end talent from a year ago and be looking to take a step in the right direction, and especially so in Big Ten play.

Michigan played last season without attackman Bryce Clay after he suffered a season-ending knee injury in the fall. Clay, who put up 23 goals and four assists in 2021, will return this spring and do so to an offense that is led by new offensive coordinator Scott Bieda.

Following a season in which the Michigan offense averaged 14.07 goals per game as the 11th-best scoring offense in DI, Michigan sports on offense once again that is full of weapons and has a ton of potential. How this unit looks and operates throughout the season, and whether or not it will have those hiccups it did at times last season, will be a crucial point to watch for this Wolverines program.

Does The Defense Continue to Improve?

During the first year of the Conry era, Michigan allowed an average of 9.7 goals per game. In the next two full seasons following, the Wolverines allowed 13.46 (2019) and 14.75 (2021) goals per game, seemingly getting progressively worse. However, after a few seasons of defensive struggles, Michigan began to trend up on that end last season.

At season’s end, Michigan had the 24th-ranked scoring defense (11.1 goals allowed per game) in DI lacrosse and was top 30 in caused turnovers per game. The Wolverines ranked 33rd in defensive efficiency, per LacrosseReference.

How Competitive Can Michigan Be in The Big Ten?

One of the biggest questions surrounding Michigan since the inception of Big Ten lacrosse has been how competitive in program can be in conference on a year to year basis. In the eight years of existence of the Big Ten as a lacrosse conference, the Wolverines are 5-35 all-time. Two of those four wins came during the 2021 season where the league opted for a conference-only schedule. Michigan’s other three league wins came in 2015, 2018, and 2019. The latter two being in the Conry era.

Despite going winless in league play last season, Michigan fell in each of its final three games by an average of 1.3 goals. And that included a one-goal loss to Championship Weekend attendee Rutgers and NCAA Tournament goer Ohio State. Perhaps those close losses are a sign that with another year under their belt together, and with some more reinforcements on the offense, things will be better for the Wolverines in 2023.

However, it is still true that at the end of the day Michigan will have to show how good it is against Big Ten competition and how they will be judged in that regard is by what is in the win and loss columns.

Brown came in against Penn State and provide a spark, tallying five-goals to help get the Wolverines back into the game and force overtime. He would start each of the final three games of the year and end the season with 13 goals and three assists. Expect Brown to have a much greater impact on the Wolverines’ offense throughout the whole season in 2023.

Michigan brings in an 11-man freshman class with its 2022 recruiting efforts. The class is headlined, in part, by in-state star attackman Bo Lockwood (Hartland, Mich.) Rated as a four-star and ranked as the No. 62 player in the class by Inside Lacrosse, he was the Michigan Mr. Lacrosse in both 2021 and 2022.